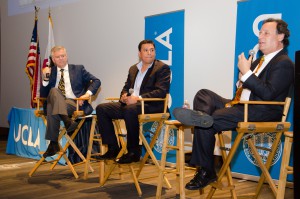 To end homelessness in Los Angeles, it will take a host of community partnerships and a holistic approach, city and county officials said during a panel hosted by UCLA.

“It’s affecting everyone now,” said 14th District City Councilman José Huizar, when asked about why homelessness has just now been declared an emergency crisis situation. “There are encampments in areas where we’d never expect them.”

The City of Los Angeles recently announced its plan to contribute $100 million toward ending homelessness, which has increasingly been in the news. The homeless population in Los Angeles County has jumped by more than 10 percent since 2013.

“The city’s neglected the issue,” Huizar said, adding that traditionally the homeless population is “out of sight, out of mind,” concentrated primarily at Skid Row. Now, voters are telling councilmembers otherwise.

Ansell agreed, “Homelessness is no longer concentrated in a small geographic area.”

He noted that the county has seen an increase in its homeless population, and people are seeing more lived-in vehicles and encampments.

There are a multitude of reasons for this, Ansell continued, chief among them the recent recession and the fact that rents have increased sharply but wages have not.

“That’s the fundamental issue,” he said.

However, there is good news when it comes to helping with homelessness, Ansell said. Federal and state medical benefits have been extended to many who did not have access previously. Los Angeles County Sheriff Jim McDonnell and District Attorney Jackie Lacey have also changed their offices’ approach to criminal offenders when it comes to homelessness and specifically mental illness. 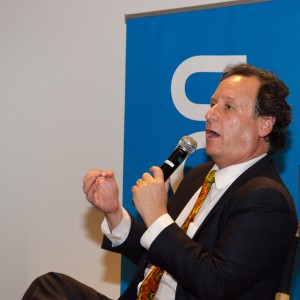 “The political will to end homelessness is the best it’s been in 20 years,” Ansell said. “We all sense the same thing.”

“We all have to take advantage of these windows of opportunity,” Huizar added, calling for the need to have a plan for homeless individuals when they are released from hospitals. Huizar said that a tweaking of a local ordinance will allow city responders to break up homeless encampments and send in social workers to refer homeless individuals to proper help and care.

He noted that Skid Row’s footprint has been getting smaller with gentrification and improvement efforts downtown — but the homeless population is getting larger.

Ansell noted that Proposition 47, which changed most drug charges to misdemeanors, has also come under fire for taking away people’s desire for treatment, but that is not necessarily true. Ansell said he has a very positive outlook for the future, due to changes in the MediCal system. He imagines a world one or two years from now where everyone who leaves jail for substance abuse and mental health problems would get immediate state health care.

“Most of the mentally ill will seek help,” he said. “Most homeless populations would go provided they have access.”

Huizar said there is a need to institutionalize a full holistic approach that includes housing and mental health care.

“It’s much more than money,” he noted.

Ansell agreed, adding that it’s much less costly to pay for housing, in many cases, than future medical bills. The Board of Supervisors also recently approved $50 million, and Ansell said he expects it to create advisory rules that will compliment city efforts.

In the meantime, Huizar said that a plan is coming to Skid Row that would release 20 social workers into the encampments daily to administer services. He also wants to create storage facilities across the city that will allow homeless individuals to store their personal belongings while they receive care after encampments are broken up. These measures are expected to go into effect this month.

“We’ll start getting a better sense of who these people are and what they need,” he said.

UCLA Chancellor Gene Block introduced the panel and commended everyone in the auditorium for their hard work regarding homelessness in Los Angeles. Earlier in the day, students, alumni, faculty and staff representing UCLA and more than 40 programs devoted to serving homeless and other vulnerable individuals spoke with city councilmembers, county supervisors, and their staff members.

“We stand ready to help our community partners,” Block said.