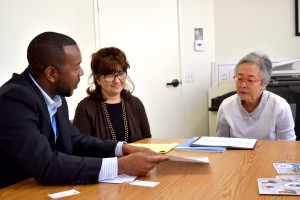 Advocates presented customized information to elected officials and staff members during this year’s UCLA Day in the District. (photo by Jonathan Van Dyke)

“We want to talk more about the resources we have for you,” UCLA advocate Darryn Harris said as he reached out to Nancy Farias, district director for 43rd District Assemblymember Mike Gatto, and handed her a folder full of information on UCLA’s impact within her constituents’ community.

UCLA faculty, students, alumni and advocates spread across the Greater Los Angeles region on March 4 to show the civic leaders that the university is doing great work in their own backyards. UCLA Day in the District, which will also take place on March 11 and 18, presented an opportunity for UCLA to reconnect with legislators and staff members and remind them that a great resource resides in all of Los Angeles.

“It’s very effective, because you can see the impact of the university outside of the campus limits, which is great, because I think sometimes people just think UCLA is Westwood,” said Alex Zucco, field representative for 41st District Assemblymember Chris Holden.

Advocacy teams met with up to three California Assembly and Senate offices, sometimes with the legislator, but often with key district directors and field representatives — the boots on the ground. This year, advocates concentrated on specific topics customized specifically for each elected official, including college access and outreach, veterans, and cancer research. Later dates will center on undocumented students, foster youth, developing future educators, technology transfers, and homelessness. 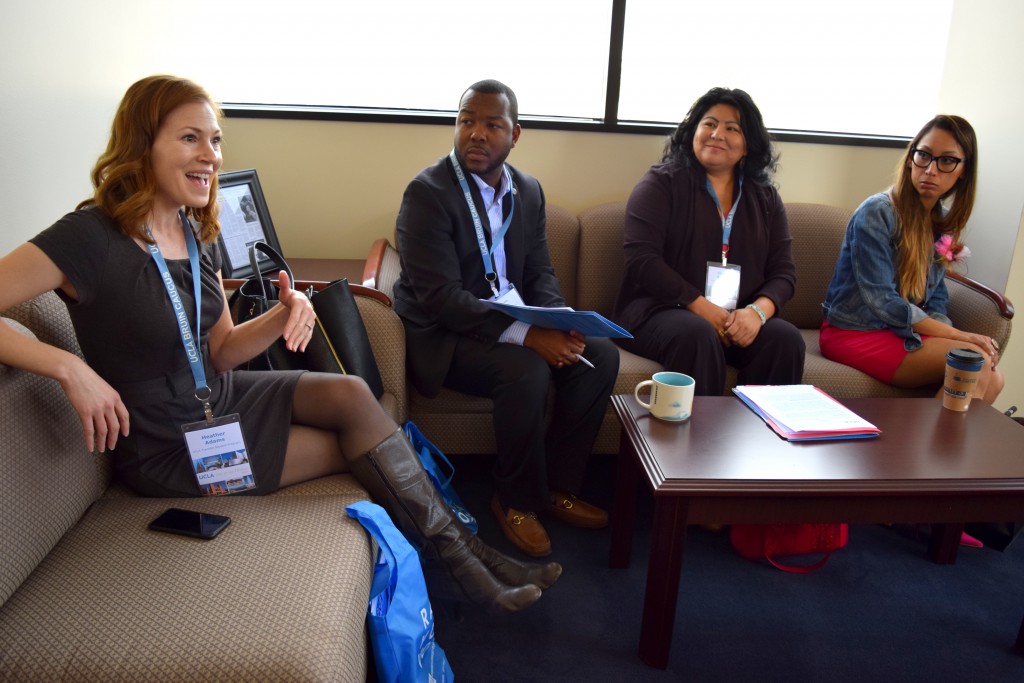 Several members of the #UCLAdistrict coalition visited first thing March 4 with Farias, bringing with them an enthusiasm for transfer students and examples of working to help underrepresented student populations transition to UCLA and other UC universities.

Gonzalez is one of more than 30 mentors who go out into 19 different community colleges, offering advice and programming that encourages students to move forward on their plans to transfer. The secret weapon? Gonzalez know these students’ stories because she was one of them — she transferred from Pasadena Community College to UCLA. 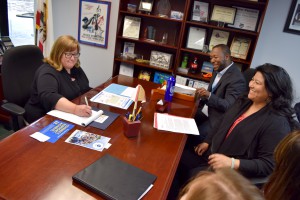 “I always knew I was going to pursue higher education, but I was concerned about leaving my job,” she said, noting she had hit a point in her career where she was unable to advance without a college degree. Gonzalez had two children, and was questioning her decision to enroll. “Why did I leave my job? What am I doing here with a bunch of high school students?”

CCCP helped offer a way forward and a clear path, she said, and now she is a Latin American Studies graduate student.

“Once you start that fire in students, they can become unstoppable,” she said of the help CCCP mentors have given her and others. “You begin to spread this network across campuses.”

CCCP was founded in 2001, and helps at least 300-400 students through its scholars program annually, CCCP administrative coordinator Claudia Salcedo said. 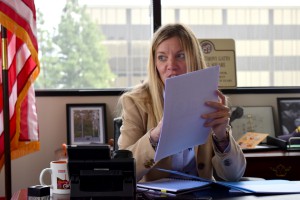 Liu said she was pleased to know that foster youth were being helped by the programs, and noted it “shouldn’t be hard in California” to find underrepresented students worthy of help. She has added that she is a proponent of finding more ways to fund higher education, an institution that often gets pitted against public safety and the prison system for money.

The CCCP program was created when diversity numbers took a dive following the passage of California Proposition 209.

“The university needed to create an approach to ensure another path to increase the number of diverse students,” Salcedo said.

One of the biggest parts of CCCP is finding opportunities to introduce potential transfer students to a campus like UCLA. “Part of it is they don’t have the awareness of what it takes to transfer,” Salcedo said, and the visits help make the students feel confident they belong. 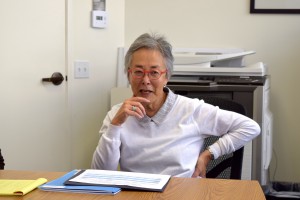 Once they do make the transfer, UCLA offers the guidance of the Transfer and Non-Traditional Students unit of the UCLA Bruin Resource Center and Program Director Heather Adams.

“We want them hitting the ground running,” she said. “The first quarter or two is a vital time when you can feel like you are in over your head.”

She noted that there are approximately 7,000 transfer students enrolled at UCLA at any one time, the majority who commute everyday. Adams and her staff help provide students with resources to make the transition smooth.

“It can be a little bit of a culture shock coming to UCLA, she said. “It’s huge, there are so many entities and there are a plethora of resources, but sometimes you don’t even know what questions to ask, let alone where to go ask them. It’s my job to make the university smaller.”

Liu did wonder aloud about the amount of funding the UC was requesting. Advocates reiterated UCLA’s support for Governor Jerry Brown’s 2016-17 budget proposal — which includes a 4 percent base budget adjustment, $35 million for deferred maintenance, $25 million for cap and trade projects and $171 million for retirement costs — and emphasized an additional request for $6 million to enroll 600 graduate students to better support UC during an influx of 5,000 new undergraduate students in the next couple of years. 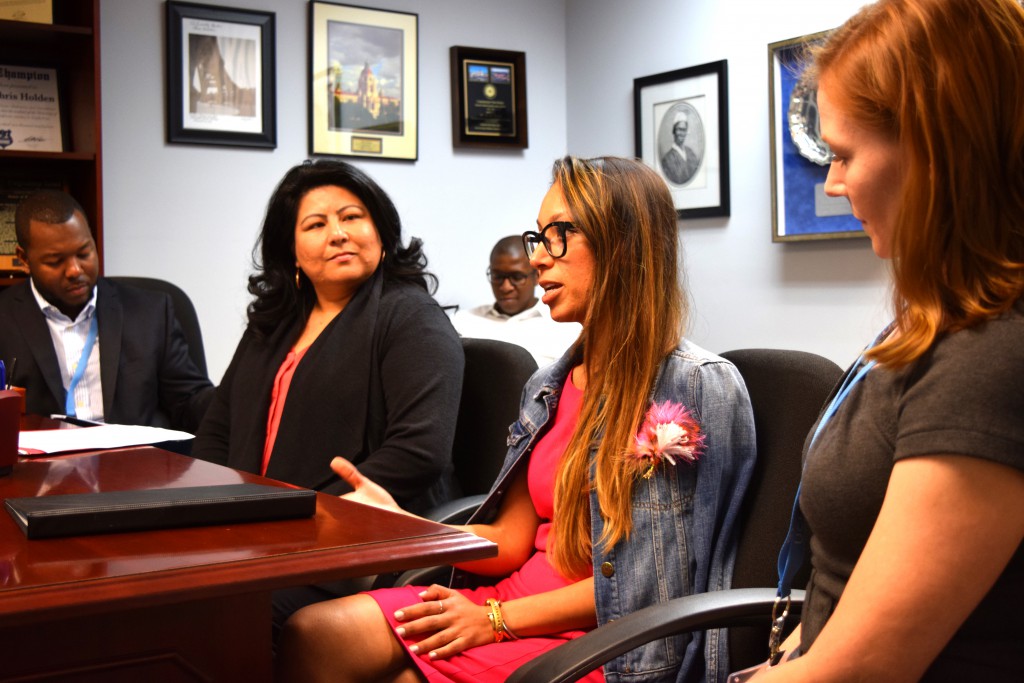 The meetings left a positive impact on the advocates involved, whether from the candid conversation they had with Liu, or the ability to really lay out their plans for current and future students coming from the region.

“I loved being able to see all the various interests and policies they have to balance, and really learn what they are thinking about,” Adams said. 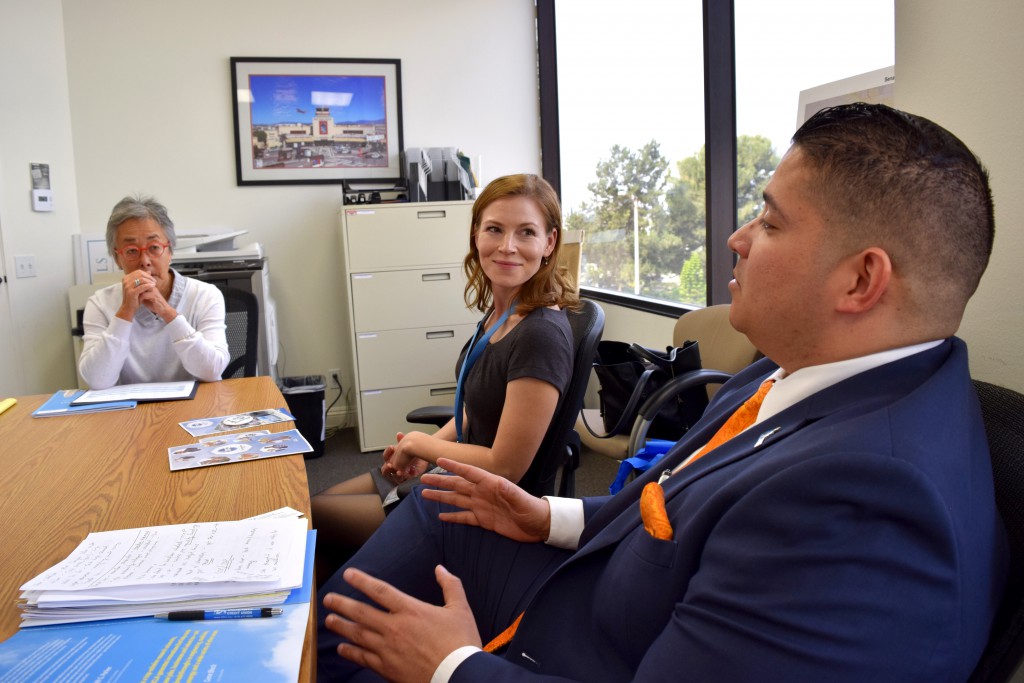 “I like that we could come out and give an example of how UCLA actually is out in the community,” Salcedo added.

2016 UCLA Day in the District Report