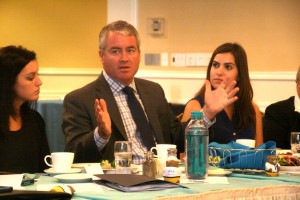 Assemblymember Patrick O’Donnell addresses a number of students, alumni and faculty during a lunch on Oct. 5.

Meeting with a group of UCLA students, advocates, alumni and faculty, 70th District California Assemblyman Patrick O’Donnell commended higher education and recognized the importance it can play regarding his most important concern: underserved K-12 students.

Before the Oct. 5 lunch, O’Donnell met with UCLA Bruin Resource Center Director Paolo Velasco to discuss the UCLA Guardian Scholars Program and it reach within the Greater Los Angeles community. O’Donnell, who has been a teacher in Long Beach for 20 years, has always been interested in helping foster youth — especially those transitioning out of the system. The Guardian Scholars Program works directly with former foster youth attending UCLA. 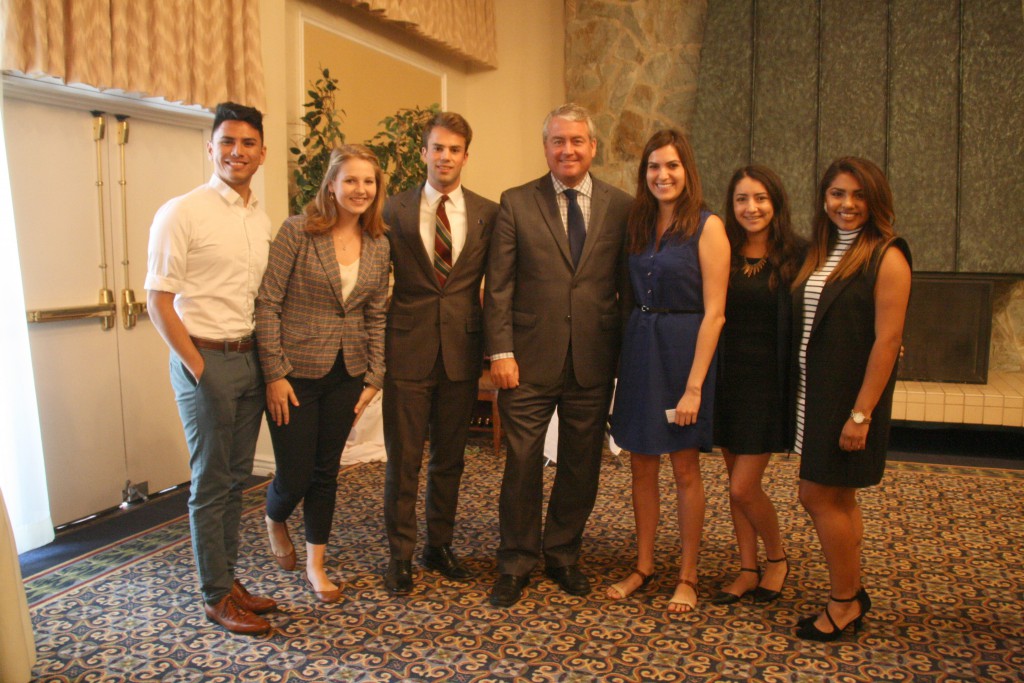 Assemblymember Patrick O’Donnell engaged with a number of UCLA student representatives during a recent campus visit.

In 2011, the program also paired with the First Start youth advocacy organization to create the Bruin Guardian Scholars Summer Academy for foster youth. It is through this program that UCLA can directly impact foster youth who are trying to make the transition from high school to college.

Thus far, the program has taken a 30-student, ninth grade cohort in 2011 and then again in 2014. In the summer, students are brought to UCLA for a four-week program with academic courses for high school and college credit, along with tutoring and various seminars. Actual Bruin Guardian Scholars — who have experienced the foster system and can best relate — serve as staff and mentors for the high school students, who can remain in the program through high school. As of spring 2015, 19 of the original 2011 cohort have enrolled at a two or four-year college. Another cohort is planned to begin in 2016.

O’Donnell also spoke with UCLA Graduate School of Education and Information Associate Dean Jody Priselac about her school’s programming. They spoke about teacher training and how UCLA is able to help local schools address important needs — specifically, Center X is developing innovative methods to train teachers and to help students meet the requirements of common core.

During the lunch, O’Donnell talked about his passion for helping to better serve students who are English language learners, noting it will take local solutions, but Sacramento can also help facilitate help through grants and more.

O’Donnell said it was heartbreaking to see the struggles of his students who were English language learners, and he would do anything he could in his power at the state level to help.

Later in the lunch, O’Donnell noted that he would be touring the state prison system, and he discussed the Prison University Project with Psychology Department Associate Dean Carlos Grijalva. The program strives to provide higher education programs and opportunities to incarcerated people at San Quentin State Prison. 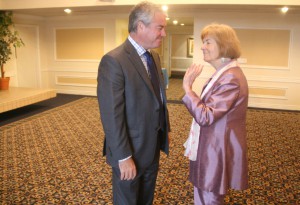 Higher Education should continue to receive the full support of the legislature, with a move toward fully restoring its dwindled funding, O’Donnell said.

“I have a lot of respect for what happens here,” he added to the group of more than 20. O’Donnell said he doesn’t support the contentious manner in which the state legislature conducted itself regarding funding higher education and particularly the UC system. “We don’t need to be point fingers.”

This was the first budget session for the newly minted assemblyman, who is chair of the assembly’s education committee, and he said he thought UC did a “wonderful job” in advocating for state money this year, and he implored the advocates in the room to “stay engaged” with the process into next year and the future.

Although O’Donnell comes from a city dominated by California State University, he said he was not a fan of the negative back-and-forth that occurred during the state budget sessions that pitted the two institutions against one another.

“Sometimes, I think I was more on the UC side,” he noted.

O’Donnell touted his fiscal conservatism, noting he helped create a “rainy day” fund for Long Beach while he was on the city council, but also said he firmly believes in continuing to restore funding to higher education.

“We saw some good times and we saw those times change,” he added, alluding to prior budget struggles for Long Beach and the state.

“Mature voices need to prevail,” he said regarding next year’s budget discussions, while also noting that UC needs to show transparency and have its facts in line and ready to present to legislators when the budget negotiations roll around again.