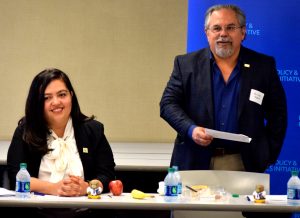 Assemblymember Wendy Carrillo has found success where there was once failure, a lesson in persistence she tries to impart on the next generation of civic activists and idealistic young people.

“My trajectory is very different than those who have been looking to run for office for a while,” she told an audience of students, alumni and faculty during a special lunch on UCLA’s campus.

Carrillo was invited by the UCLA Latino Policy and Politics Initiative (LPPI), in partnership with UCLA Government and Community Relations, for the second ever LPPI Diálogo, a conversation to discuss 21st Century Leadership.

“One of the things we’ve been trying to do at the Luskin Center, is we speak to current issues,” Luskin School of Public Affairs Dean Gary Segura said while introducing Carrillo. “We try to address them in a meaningful fashion.” To that end, there has been a desire to bring decision makers who are influential in their communities. “Assemblymember Carrillo was able to prevail against some tough challengers and become elected to the [California State] Assembly.”

Carrillo had been working for the past 12 years in media. She hosted the “Knowledge is Power” show on the hip-hop Power 106 radio station — reaching a Sunday morning viewership of about 1.2 million people.

“We talked about issues like educational equity, progressive issues like school-to-prison pipeline — LGBTQA issues as well. And so, I’ve had a long career in terms of social justice movements,” she said. 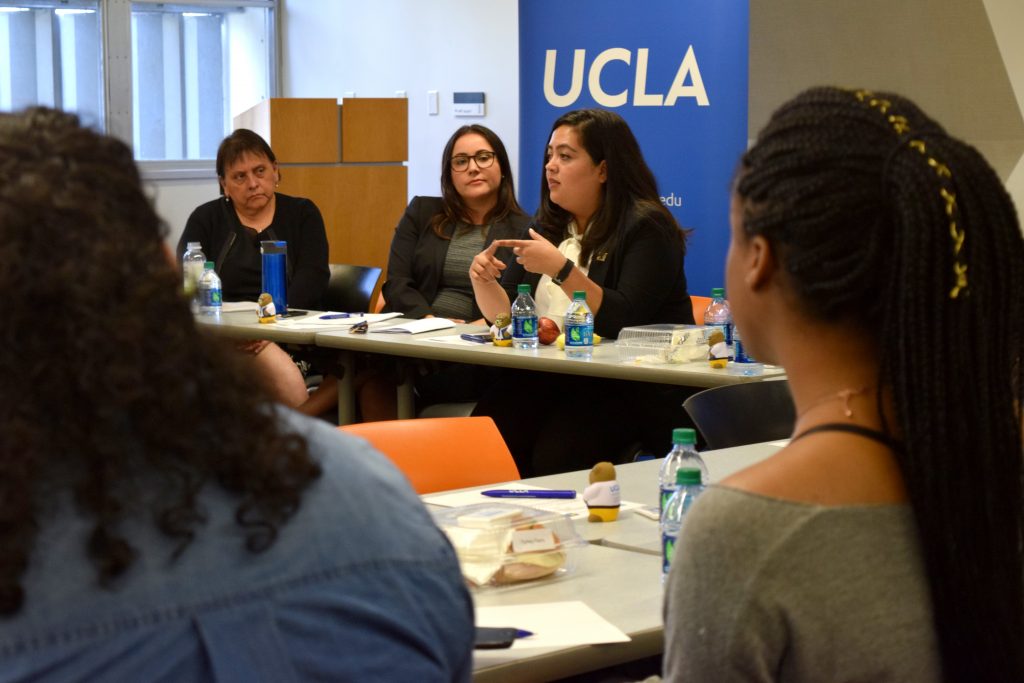 Assemblymember Wendy Carrillo spoke about what inspired her to run for office during the lunch.

Carrillo also worked for the labor organization SEIU (Service Employees International Union) and she co-founded an app that helped deal with human rights violations around the world. However, in August 2016, everything in her life “came to a head.” Her show ended, her app startup shut down, and Carrillo was left to start from scratch.

The election of Donald Trump to the presidency was several months away. Before that happened, Carrillo decided to get into her car, with her little dog, and go talk to people across the nation. Why were they going to vote for the man who ultimately won the election? She traveled from Los Angeles to Louisiana, and then to North Dakota.

“This little bubble that we live in LA and California looks very different from the rest of the country,” Carrillo added.

She stepped up her activism. She visited the Standing Rock protests for two months, and was tear-gassed and endured a flash grenade. A friend nearly lost her eye from rubber bullet fire.

When she returned to California, the world was different. Congressman Xavier Bacerra decided to step down and become the California Attorney General. Carrillo looked at the landscape and said, “If not now, when, and if not me, then who? I decided to launch a Congressional campaign based on values. That love is love, that no human being is illegal, that science is real, and all these other factors like women’s rights and human rights.”

She ultimately did not prevail — UCLA alumnus Jimmy Gomez ended up winning the seat, and therefore, vacated Assembly District 51. There were not many familiar female faces in these races, and despite how hard it might be, Carrillo decided to enter another special election to replace him.

“We need to walk that walk and face those challenges head on,” she said. “And at the end of the day, the state can certainly do a lot more than the federal government right now in an effort to protect our communities.”

She has been in office now for 15 weeks, making equity, justice and opportunity the three pillars of her political beliefs and goals. “It just feels like a lot. I guess the moral of that story, what I said in the campaign, is do not wait for someone to tap you on the shoulder and tell you, it’s your turn.” 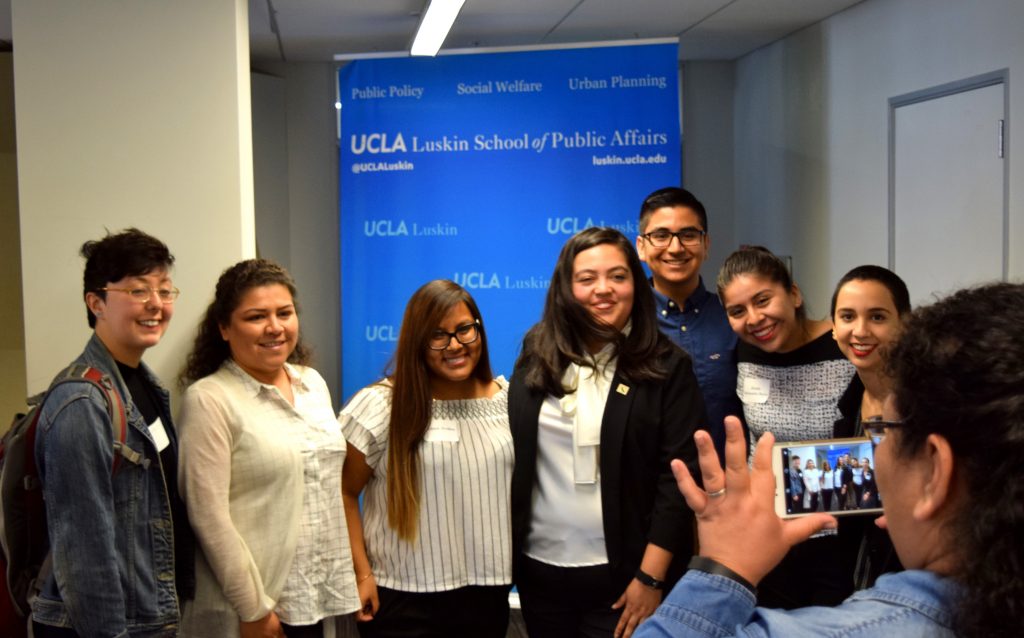 Assemblymember Wendy Carrillo takes a moment for a photo with students.

In the next several elections, Carrillo believes the shape of the California legislature will change. Term limits were just set for 12 years, and women are seizing several open seats.

“We will see the beginning of continuity,” she said, before addressing a major concern. “For a lobbyist to call themselves the Third House, as if they have equal playing power, shows you that there has been a decline of the voices of the people in terms of what legislation looks like. But the power is shifting in Sacramento.

Women face obstacles, she said, but they are making gains. “We know that women just think about issues differently. I would say the biggest challenge women face when running for office is raising money.”

Her goal is to be chair of a committee as soon as possible. “Because we have such a huge gender gap in equality, most of the committees are not chaired by women because we do not have the numbers. I think there is a momentum right now for women, but we want them not just running for office, but winning.”

Carrillo detailed some of her early work in the legislation and what she is interested in.

She is a part of the Appropriations Committee. “That’s where bills move forward or die. So sitting on that committee certainly gives you perspective to what’s coming up within the legislature.” 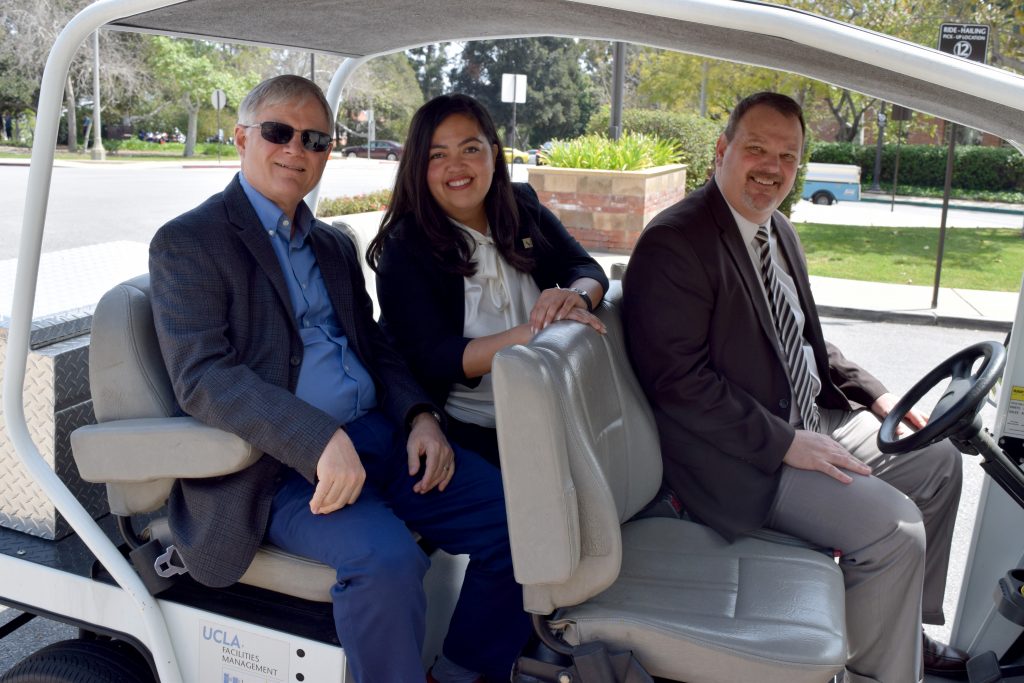 Carrillo toured the UCLA campus with CFO Steve Olsen and Assistant Vice Chancellor of Facilities Management Kelly Schmader, who were able to show her campus highlights, while outlining campus infrastructure areas that need vital repairs and improvements. The University of California is requesting $35 million in one-time use money for critical deferred maintenance projects, and as a member of Appropriations, Carrillo will be one of several legislators that reviews all bills with any fiscal impact.

As a member of the Health Committee, she said she seeks to figure out where the gaps in access are and alleviate those issues, while continuing to examine the possibility of a public statewide healthcare system.

Carrillo is a Latino immigrant and formerly undocumented, so issues concerning those communities are a priority. “This is a very real issue to me. I certainly intend to use my position to be an advocate and a champion for our communities in a time where we continued to be attacked from a federal level.”

She noted the need for the government to include those communities — to communicate more directly with them. She is prioritizing K-12 education — getting it right by third grade, so that there is no school-to-prison pipeline, per the research.