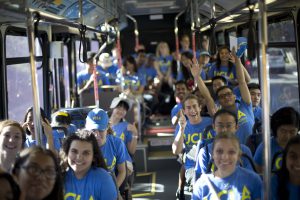 With the support of locally elected officials, UCLA students were transported by bus to locations all across the city during Volunteer Day.

The proof was posted on an office door — a collection of more than 20 letters from elected dignitaries across the state. It was a culmination of an effort that resulted in more than $140 million in public-private investment to Southern California.

Earlier this summer, it was announced that the Smart Manufacturing Innovation Institute’s California regional hub would be headquartered in Los Angeles and spearheaded by UCLA, among other collegial partners. The hard work to win the project started in May 2013, and culminated in a $70 million matching grant that was only possible by the combined efforts of elected officials at local, state and federal levels, along with an eager community coalition.

“The extraordinarily extensive support from our local, state and federally elected representatives gave our winning application crucial legitimacy, and showed that UCLA, and the coalition at large, had the political support necessary to take an institute forward,” said UCLA Vice Provost of Information Technology Jim Davis, who will serve as its interim executive director.

The institute will develop smart sensors and digital process controls for use in advanced manufacturing — the goal being to improve efficiency in manufacturing and reduce energy expenses. It is a consortium of nearly 200 partners from across academia, industry and nonprofits from more than 30 states. The hope is for the institute to spur job growth in the manufacturing sector.

Making connections and forming partnerships is a major focus of UCLA’s Office of Government and Community Relations. Throughout each year, staff works behind the scenes to partner elected officials with important projects in order to gain critical funding, building meaningful and lasting relationships along the way.

The Smart Manufacturing Innovation Institute application might be the most ambitious of these efforts in recent memory, spearheaded by Federal Relations Executive Director Kim Kovacs and State Relations Assistant Director Nicole Madani — whose office doors filled with the celebratory letter collage.

“We were competing nationally against other states, and they obviously have other elected officials supporting their proposals,” Madani said. “It was really important that the federal Department of Energy understood that the state and also the city were committed to the project. They didn’t want to award it to somebody who they didn’t think had that commitment there at the local level.”

“You always want to try and receive elected officials support because it just makes the application stronger,” Madani said. “From what I’m told by the co-chair of the California delegation, this was one of the truly bipartisan letters they’ve ever had. There wasn’t just a token politician of opposition signing on. We had all kinds from throughout the state, which generally doesn’t happen.”

Mayor Eric Garcetti and the city donated a 70,000 square foot building for a $1-a-year lease over five years.

Elsewhere earlier in the year, it was California Assembly members who stepped up to the plate, endorsing a federal grant application for UCLA’s Center X to implement professional development activities to improve instruction for English learners.

More than the letters — which came from California Sen. Holly Mitchell and Assemblymembers Reggie Jones-Sawyer and Autumn Burke — are the connections made through the process, Center X Executive Director Annamarie Francois said. 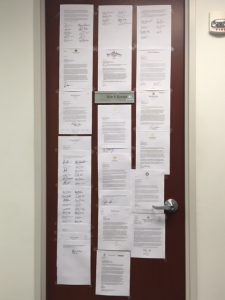 “They are the ones responsible for developing legislation and policy that influence the work we do at the Center, and as a result, influence teacher-learning and K-12 students,” she said. “Educator voice has to be a part of all those policy decisions. We solicit letters of support, which helps them understand what we are doing, and it allows funders to realize we are part of a local, regional and statewide movement that values particular approaches to teaching and learning.”

After the process, she feels they have a stronger bond with political leaders.

“We’re not looking for a rubber stamp, but more about our government officials being in partnership in what we do,” she added. “It’s affirming to know that folks who make these decisions care about the same things we care about. The grant could totally change these students’ academic trajectory as they enter high school.”

Locally, UCLA Volunteer Center Director Shannon Hickman said it makes a world of a difference knowing the Los Angeles City Council and Los Angeles County Board of Supervisors are behind the massive UCLA Volunteer Day effort each year. Specifically, the offices of all 15 council members and five supervisors donated 68 buses to the cause last year, and they are expected to pitch in again this year on Sept. 19.

“Volunteer Day is the first opportunity UCLA has to instill in its new students the principle of giving back to the greater Los Angeles community,” Hickman said. “To know that the officials we elect to local office share that same value makes it that much easier to inspire the students moving forward — it is also great to see many of those same elected officials getting out there and getting their hands a little bit dirty. That kind of local partnership goes a long way in creating the civic leaders of tomorrow.”