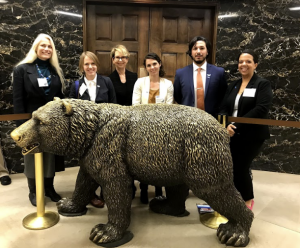 To help ensure that UCLA can continue turning its research into positive impacts throughout Los Angeles County, four graduate students recently traveled to Sacramento to lobby state legislators for more funding so they can continue that kind of difference-making work.

“The nice thing about graduate students is you sort of get two for one. You have them supporting the undergraduate population, and then, in addition to that, doing the research that is also an important part of the university’s mission,” said Leslie Rith-Najarian, who is a fifth-year doctoral student studying clinical psychology at UCLA.

“This was a great opportunity to showcase the extraordinary research that UCLA graduate students do every day, finding answers to complex problems affecting California citizens and communities,” said Garrell, who is also vice provost for graduate education. “Our graduate students were incredibly effective in explaining their work and its impact. Their stories made a compelling case for the importance of graduate education and research in the University of California.”

With UC increasing its overall undergraduate enrollment by more more than 2,000 students during the next two years, the graduate student advocates from all the UC campuses were asking state legislators to approve $5 million in funding to support 500 new graduate students. The UCLA group was able to meet with 20 members of the California legislature and their staffs.

“Look, graduate students are a big component of the university, because they mentor, they teach and they inspire undergraduate students,” said David Gonzalez, fifth-year doctoral student in atmospheric and oceanic sciences. “I train students in my lab and get them ready to do independent research, and go off into graduate school or industry, if they want.” 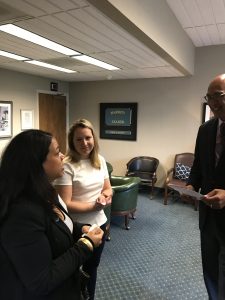 “I’ve been in classrooms as a teaching assistant before,” said Stephanie Keeney-Parks, first-year doctoral student studying anthropology. “Having a woman of color in a classroom really challenges the white hegemonic norms the students are used to learning under. And it gives them space to try and think critically through these intersections.”

For Kenney-Parks, the research is deeply personal. She focuses on people like herself — African-American parents of children diagnosed with autism. The research also examines the intersection of race and disability. While visiting the Capitol Kenney-Parks found legislators who expressed interest in possibly working with her and made a key contact with Sen. Chris Holden, when they promised to have a follow-up lunch.

For Chelsea Shover, a fourth-year doctoral candidate in epidemiology, learning that the state might be a willing partner in her research about HIV and substance abuse was encouraging.

“My policy work so far has been mostly working with people who aren’t elected officials, but spend a lot of time working with them,” she said. Her work is mainly related to a drug called pre-exposure prophylaxis, or PrEP, which when used daily is more than 90 percent effective in preventing HIV. “The challenge now is getting people who want to use it or who might benefit from it, access to it.”

Shover has worked with the Los Angeles LGBT Center frequently during her research. She was happy when staff and elected officials spoke with her about bills they were considering, and how they might be able to use a researcher during the process. “I like that it laid out what really could be a good collaboration someday.”

Rith-Najarian presented on engaging young people with mental health services, and in particular, how to reach students with online treatments for anxiety and depression.

“I really appreciated that they were listening in a way where they weren’t trying to feign expertise, but rather willing to ask questions, and really good questions,” Rith-Najarian said. “Even if you leave the room and nothing politically has changed, you still educated an individual person about something they might not have known about before, and that is worthwhile.”

Gonzalez, who has been studying air pollution from wildfire smoke, felt his research really interested many legislators. “Wildfires are on the rise, and it hits close to home in California. We just came out of the craziest fire season we’ve maybe ever had, so there was a lot of support.”

Gonzalez has been a major beneficiary of a California education. He first attended Moorpark College, then studied chemistry as an undergraduate at UCLA, and is now a UCLA doctoral student.

“I’ve seen the whole spectrum of college education in California,” he said. “And I will say, I wouldn’t be pitching some of the things up there had I not been inspired and supported by graduate students and faculty. I’ve been on both sides of the table, so that’s been really cool.” 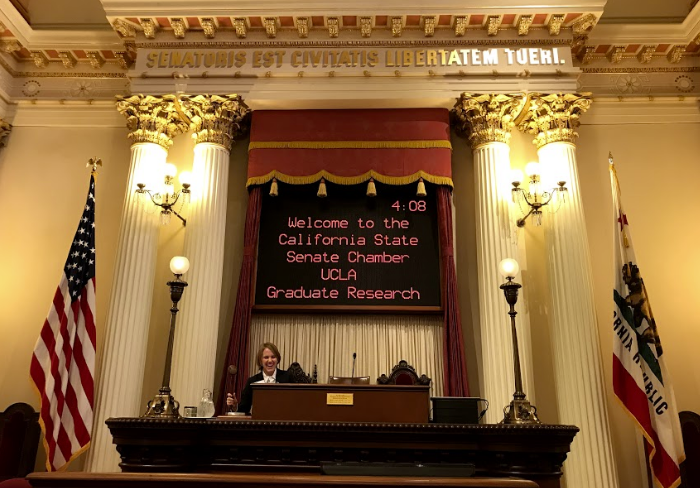 UCLA graduate student Chelsea Shover gets an opportunity to pound the gavel in the California State Senate chambers.

The day wasn’t all intense meetings, and the students enjoyed a moment of levity when Sen. Steven Bradford took them to the assembly’s main floor. The electronic sign welcomed the UCLA coalition, and Shover, who by virtue of being closest to graduating, was allowed to bang the gavel. Earlier that day, Sen. Toni Atkins was sworn in as the new Senate President Pro Tempore.

“It was neat to be there the day the first woman and openly gay pro tem was sworn in,” Shover said.

“It’s important to fund grad research well,” she said, “so when we go into these classrooms, that we are challenging these young people, and we’re helping to teach this undergraduate population, and that we are providing space for other underrepresented students to see people like us be OK in graduate school, and they can do this.”