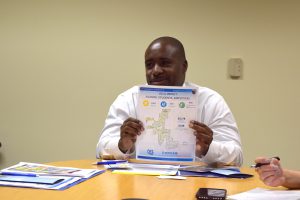 Matthew Flesock, an assistant manager of a UCLA Health program that has set up fitness centers in 103 LAUSD schools, waited anxiously to talk to L.A. City Councilmember Paul Koretz about the new gym the program recently established at Hamilton High School as well as one opening up soon at Emerson Middle School, located in Koretz’s West L.A. district.

This was all good news to Koretz, who said he had never heard of the program before. He expressed excitement about seeing the Emerson facilities when the program launches in December.

Flesock is one of dozens of UCLA staff, faculty, alumni and students who, in September and October, are fanning out across the county, from downtown L.A. City Hall to the suburbs, to speak to 20 elected officials, or their designated staff, about the strong bond UCLA has with communities in their districts.

It’s all part of UCLA Advocacy Days with Local Government, an annual outreach effort organized by UCLA Government and Community Relations. The meetings included a face-to-face with City Council President Herb Wesson and visits to all five of the Los Angeles County Board of Supervisors offices. The three-week effort will culminate Oct. 13 at the Los Angeles City Hall with a public reception and program.

“It’s incredibly valuable to be able to sit down face-to-face with our elected officials on a district basis,” said Flesock, “because you can really hone in on the individual impact of your program, other programs and the institution at large, and share with them directly the work happening in their area. … An email or phone call to them is nowhere near as impactful.” 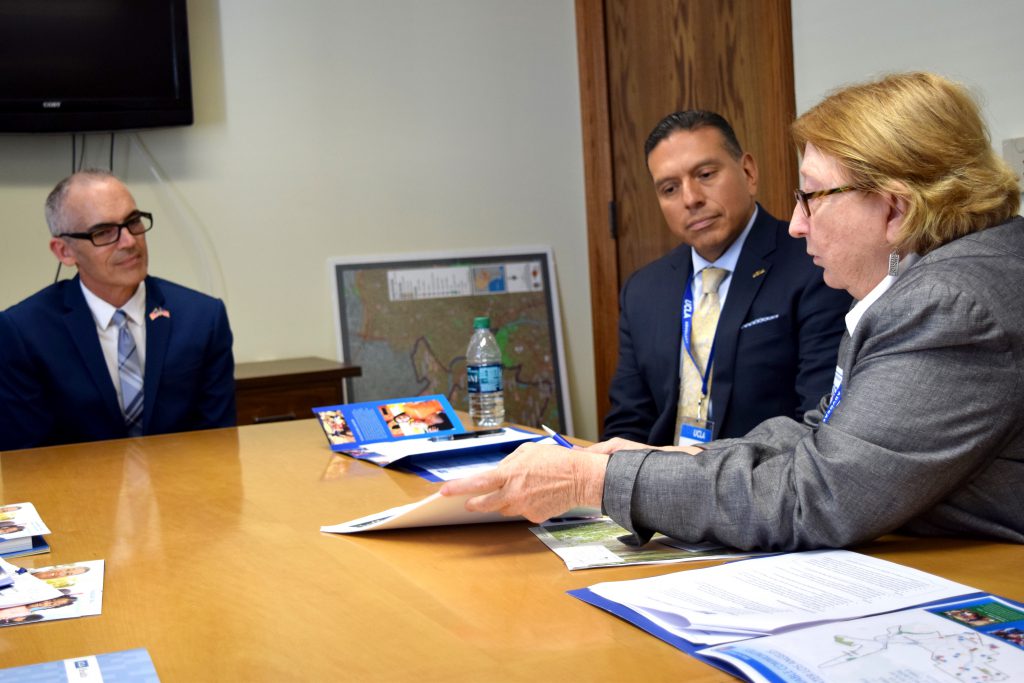 The meetings also offer an opportunity to build future partnerships and collaborations among the city, county and the university and to find out from elected officials how UCLA can further help to improve the lives of Angelenos.

“It’s not a relationship if we just tell you the things we’re doing,” said UCLA Government and Community Relations Executive Director Richard Benbow.

When Valerie Borel, coordinator of the UC Master Gardener Program, visited City Councilmember Marqueece Harris-Dawson at his downtown City Hall office, she told him about the 300 volunteers in the program working at 11 community garden sites throughout the county.

“We would love to have assistance from your office as to where our master gardeners should spread their knowledge,” Borel told him.

As it just so happens, Harris-Dawson said, he and others have been talking about creating a community garden in his district. “We are looking for people to get this going,” he said.

“We could be that resource,” Borel replied, giving him a big smile as the two talked about meeting again.

For this year’s series of meetings, UCLA advocates were chosen for their expertise in three areas — sustainability, health and education. 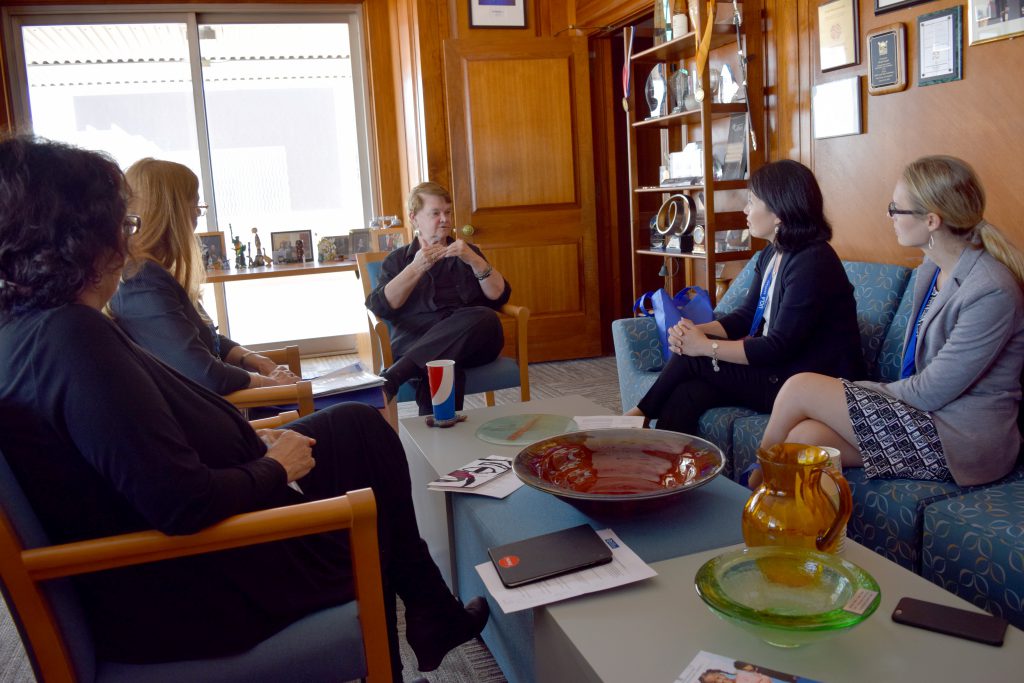 One such expert, Stephanie Landregan, director for the UCLA Extension Landscape Architecture program, told Councilmembers Koretz and Mitch O’Farrell about the award-winning design her students created for a drought-tolerant median for city streets. The student-designed median could be built along San Vicente Boulevard, which is in Koretz’s district.

Koretz noted that, instead of paying a professional design firm, the neighborhood would save money by using the students’ design.

During that same visit, Stefanie Espinoza had a chance to tell O’Farrell about UCLA’s Early Academic Outreach Program that sends tutors all over the city to work with over 15,000 students in middle and high schools each year. A site manager for the program, Espinoza works at Fairfax High School, where she encourages students to “go above and beyond,” do volunteer work and take Advanced Placement exams.

“UCLA is a great partner, I think, in a number of ways,” O’Farrell said later.

After their meeting, Espinoza said she had never knocked on elected officials’ doors before like this. “I didn’t know this kind of outreach was done, so it was great to have [elected officials] become aware of the things we do in this community.” 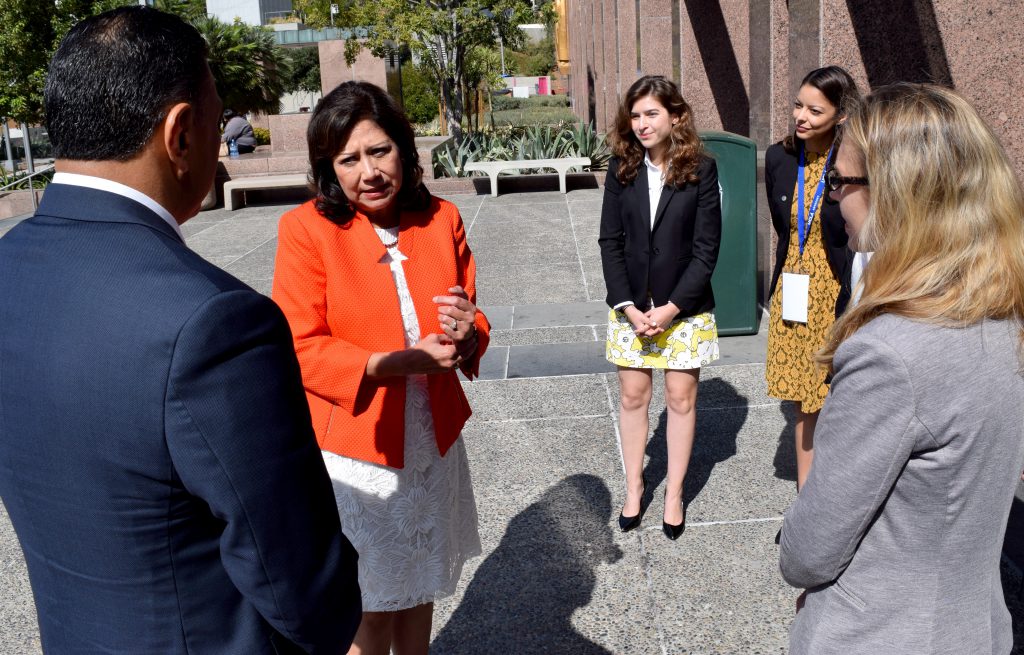 A UCLA advocacy coalition bumped into Los Angeles Supervisor Hilda Solis just as she was returning to her county office.

Marco Perez, UCLA assistant director of community and local relations who led the advocacy group on the Sept. 28 visit with O’Farrell, said, “This is only a small slice, really, of what UCLA has to offer.”

Advocates also reminded elected representatives that the relationship between UCLA and city is not just about programs. UCLA students, staff, faculty and alumni also live in their districts.

For example, Harris-Dawson learned that his eighth council district is home to 998 UCLA employees, 1,067 alumni and 230 students. The university’s direct payroll to residents living in his district is more than $39 million, illustrating UCLA’s powerful economic impact on local communities.

Council President Wesson said he was always excited to hear from university representatives, and it continues to be important for his office and constituents across the city and county to hear from UCLA, and for alumni, students, faculty and staff to continue to push out the positive Bruin message that he sees exemplified throughout the year, especially during these advocacy days. 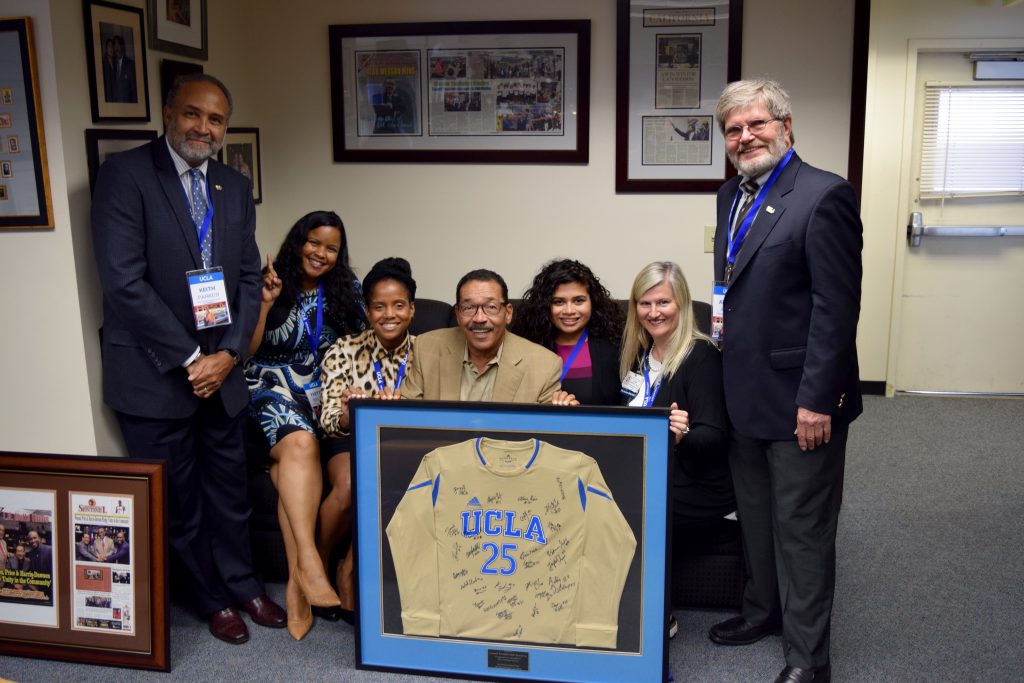 City Council President Herb Wesson was able to find some UCLA memorabilia for a photo with the advocacy group that visited his office.