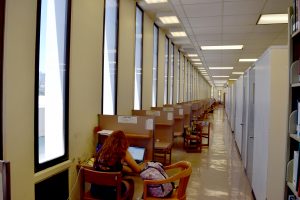 Young Research Library has been identified as a top priority of deferred maintenance work for this year, along with numerous other projects. (photo by Jonathan Van Dyke)

During the Los Angeles winter, it’s not uncommon for UCLA students looking to study at Young Research Library to be left in the wet and cold.

The issue is one of many facing the university, as administrative officials hope that state legislators approve more money for deferred maintenance — i.e. repair, replacement or renovation projects required to keep campus facilities operationally efficient and modernized.

As for Young Research Library, Kelly Schmader, assistant vice chancellor for Facilities Management, said he and his team identified it as one of the most pressing repair projects on campus.

“During rainy weather, the students can’t sit on the west or south side of the stacks because the windows leak like sieves,” he said, noting it’s been that way during the six years he’s held his position at UCLA. “With growing enrollment, our students need adequate places to study.”

“There has to be an understanding that we do need adequate facilities,” said Dayshawn Louden, a UCLA transfer student from Compton College who is studying African American Studies, Public Policy and Education. “There’s a need here.”

This year and in years past, as part of its annual budget requests of the California State Legislature, the University of California has asked for money for critical classroom, laboratory and other campus maintenance needs. Officials were pleased when the Governor and the legislature decided to earmark $35 million during this year’s ongoing talks.

UCLA is approaching its centennial, and with that comes the reality that many of its buildings were constructed in the early 1900s. Over 30 percent of the buildings on campus are more than 60 years old.

“We have compiled a list of about $150 million of known, project-specific deferred maintenance requirements,” Schmader said. “This list is based on building systems we know are either broken, or have required so much ongoing maintenance effort that we know about to fail.”

Based on a complex algorithm developed by the UC Office of the President that considers such things as building age, construction type, facility use, etc., the deferred maintenance needs of the campus are estimated to be nearly $1 billion. However, the algorithm does not produce project-specific lists. “Like other UC campuses, we have historically not been in a financial position to invest in facility assessments to find out what else needs to be done,” Schmader added. “We invest the precious deferred maintenance funds we receive in making corrections, but we’ve been almost completely reactionary, operating solely off of what systems we know are failing because they’re causing problems in our buildings.” 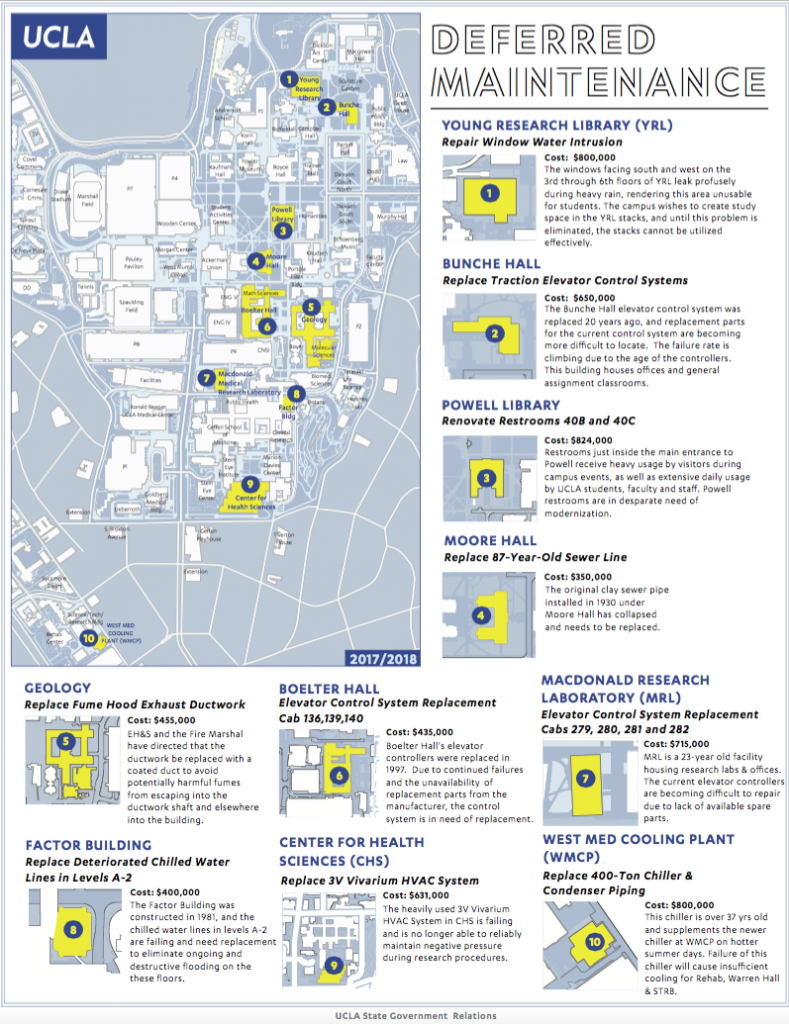 The immediate list of needs includes building systems such as elevators, mechanical systems, plumbing, electrical and roofing. “What that means is we aren’t spending any money on finishes,” Schmader said. “Things that building occupants see, like flooring, ceilings, painting, etc. have been lower priorities that we haven’t really been in a financial position to address.”

Perhaps the greatest recent example of the campus’ aging infrastructure is at Moore Hall, built in 1930 and still operating with its original clay pipe sewer line. “It’s finally crumbled,” Schmader said. “There is no one in my business that would say a clay pipe should last 87 years.”

Students often suffer the impacts. Besides the library issues forcing studiers to flee from the rain, Bunche Hall is known for it’s long wait times for the three elevators that are expected to move hundreds of people inside a 13-story building. Fortunately, those elevators, which are at the end of their useful life, are currently being replaced. At the West Med Cooling Plant things are dire — without a replacement chiller, there won’t be enough chilled water to continue vital research, which is being funded by millions of dollars of grants. Schmader’s facilities team will be executing another just in time replacement of that overaged chiller later this year.

The state legislature used to invest more heavily into deferred maintenance, but it stopped in 1989. Only two years ago did it once again allocate deferred maintenance funds to the UC. UCLA received $7.5 million in 2016 and $4 million in 2017. Otherwise, the university system has been on its own, which required debt financing from the UC Office of the President, or buying bonds and borrowing.

In a perfect world, and to adequately address these issues, Schmader noted that “industry standard” would indicate that a facility inventory the size and age of UCLA’s should receive a deferred maintenance investment of $20 million a year. Schmader said that during his tenure, the campus has continually increased deferred maintenance investment year after year, adding “I think we’ve finally realized that we can’t continue to operate this way.”