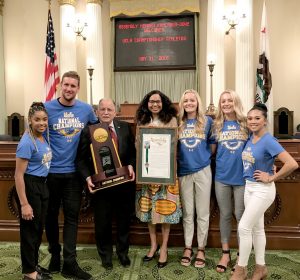 The champions were treated to a VIP tour of the Capitol building, which included a visit to the governor’s office and a climb to the top of the Rotunda for a view of the city, led by UCLA alumnus and Assembly Member Vince Fong.

Assembly member Sydney Kamlager-Dove met with the Bruins before the assembly floor session, where they were later introduced and recognized for their accomplishments.

Senator Ben Allen presented each team a resolution from the California Legislature on the Senate floor.

Following the presentations, the Bruins met with alumni legislators and staff members, members of the Sacramento Bruins Alumni Network and the individuals from the Capitol community at a reception.