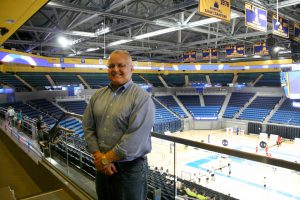 Assemblymember Tom Lackey took a moment to enjoy the Special Olympics during a campus visit in 2015.

“I’m probably the most plain guy you could ever imagine — coming from a small mining town of 3,000,” said 36th District Assemblymember Tom Lackey, reflecting on his own biography that has been anything but.

Growing up in Boron, CA, he was known around town as “Little Tommy Lackey”. His father was a dentist. It was a positive environment for a child, Lackey said, and he was the beneficiary of good influences, something he thinks might be missing in America these days.

“Right now, there is so much focus on figuring out how to be successful yourself, that you lose your focus that real value comes from thinking outside of you,” he said, while watching the Special Olympics at UCLA’s Pauley Pavilion in 2015. “That’s what really drives you into public service. Once you see the benefit, that’s when you get hooked.

“We all need to focus on our younger people and show them there is a huge benefit to thinking outside of the individual.”

Education is an important topic to Lackey. When he was younger, he wanted to join the California Highway Patrol, but as he finished off his degree at Utah State, that dream remained uncertain. He studied special education at the university, and assumed that was the path he was meant to take.

However, a year later, the CHP came calling, which launched a proud 28-year career for the freshman assemblymember. Visiting the Special Olympics is one of the many ways Lackey stays connected to his educational roots.

“My passion for special needs and public education is still strong,” he said. “It never really left me. It doesn’t leave your soul.”

Lackey’s father was a school board member, and once he had his own child, he began down that path as well. He also served as a city councilman.

“I love to have a voice. I came from a very small town that taught me that getting involved is how you get things accomplished,” Lackey said. “I wanted to have my chance, and I pursued it. And ever since then, I just love people and I love listening to people and I think that is how public policy should be crafted, is by being a listener and by being responsive to what you hear.”

Lackey joked that he didn’t need a campus tour to understand the power and influence an institution like UCLA has had over the decades. 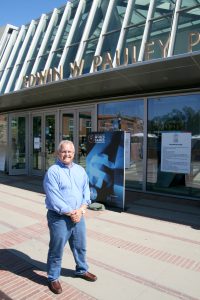 “Higher education is a key to our future success. There is no greater influence and no greater opportunity to develop our social strata, as well as our intellectual influence,” he said. “I think for decades California institutions have led the country, so we have a responsibility and duty to continue that tradition. Otherwise, our future is in jeopardy.”

The assemblymember noted that something as simple as pride in a sports team can be a great motivator for incoming students — that motivation piece is important, he added: “I think we are finally getting that with the push for career tech and STEM. We need to motivate our student population, and once we motivate people then we get their best.”

Lackey fears that higher education gets stuck on promoting its brand rather than delivering education. “When we get away from student achievement as the priority, we’re in a fog,” he added.

In the legislature, Lackey said he wants to drive constructive dialogue, especially keeping in mind the balance between public dollars and affordability.

“Because of the cost to the student, the enormous debt that is required to achieve a degree has to be part of the discussion piece. When does this figure become unreasonable? And I think we’re almost there,” he said. “We need to make sure we don’t price out some of our most brilliant minds who are overlooked because they can’t afford an education.”

Public money from the legislature can’t be the only driving force in the conversation, Lackey added, so everything from administrative salaries on down should be reconsidered.

“I don’t know how you put a dollar amount on expertise, but we need to have an open dialogue on that,” he said.

And that’s the point, he added. The need in public service to have an open mind and an open dialogue is one of its most primary pillars. Hopefully, what is accomplished now can open the eyes of the younger generation.

“We all need to implore on our younger people that there is a huge benefit to thinking outside of the individual,” Lackey said.

As he sat watching Special Olympics volleyball competitors have the time of their lives, Lackey couldn’t help but reflect and vow to continue one of his life’s greatest passions.

“There is so much opportunity to help other people who don’t have what we have,” he said. “We have to bridge that gap because these people have skills and talents that can make us better, as well.”