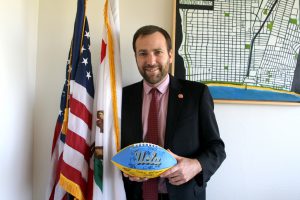 Senator Ben Allen shows off a piece of his UCLA memorabilia at his district office. (photo by Jonathan Van Dyke)

For having never actually attended UCLA, California District 26 Senator Ben Allen sure has a lot of deep ties to the institution — something that goes a long way to explaining his desire to be a champion of the campus and higher education as a whole.

“The reason I am a Californian is UCLA,” he said with a chuckle.

His father accepted a job at UCLA sight unseen. He had met Allen’s mother during graduate school at the University of Michigan. Neither had ever been west of the Mississippi River, and they decided it was time for an adventure. A couple years later, the two were married and settled down in Santa Monica. Allen’s birth followed shortly thereafter.

“My dad has spent his entire career on the faculty at UCLA in the English department and my Mom was a school teacher in Beverly Hills at a high school there, along with also being a local artist,” Allen said. “I grew up on and around the campus [of UCLA].”

Allen recalled growing up as a UCLA sports fan, and he audited a few classes during the summers.

However, when it came time for his own college experience, the young man went to the East Coast for college and England for graduate school. Then, he found his way back to California, but this time at UCLA’s rival college, UC Berkeley for law school.

“I grew up in a household that had two public educators,” Allen said, adding that his brother also taught at UCLA Fielding School of Public Health. “I come from a family that is very tied to public service, public education — and that certainly influenced me. I always found public questions and public policy concerns very interesting, meaningful and exciting.”

During his time at UC Berkeley, Allen was selected to serve as Student Regent. He penned a paper in law school specifically about school finance in California. And after he graduated, he wound up winning a seat on the Santa Monica-Malibu School Board during the recent recession. 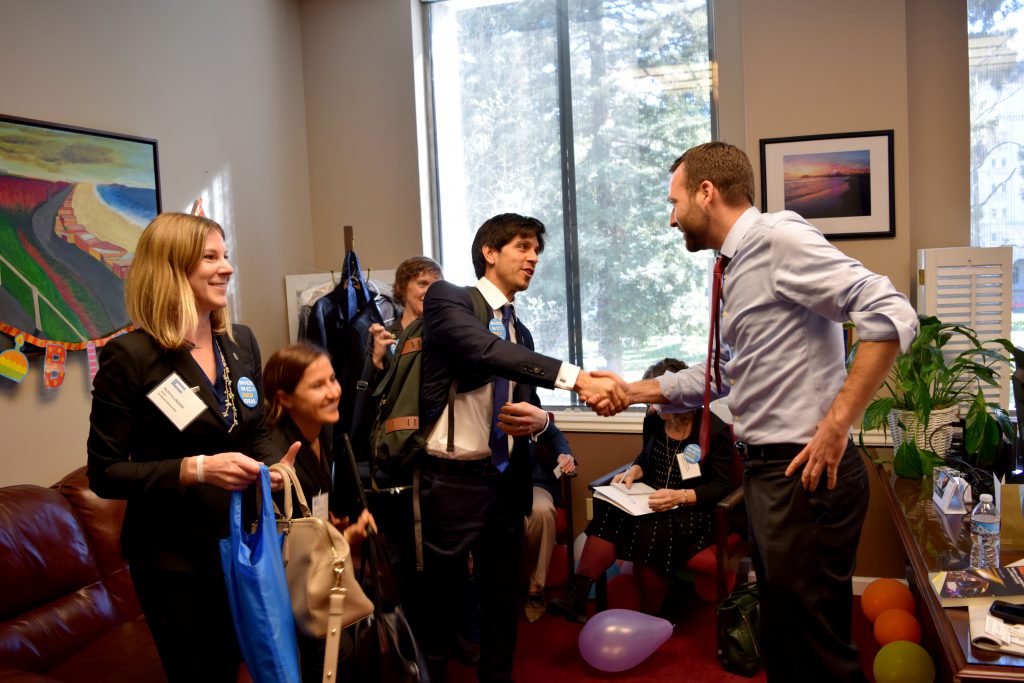 “Over time, that experience was really very interesting, but not easy,” he said. “I served on the board during a very difficult time in the state’s history. We were trying to figure out how to keep the district afloat in a very tough time.”

Allen reconnected with UCLA, teaching a law school seminar for three years about education law and policy — giving a window into what it’s like to be a school board member, district general counsel, superintendent or union leader.

“When there was an opening in the Senate, I had been thinking so much about state issues for so long,” Allen said of his decision to run. “It was a good intellectual fit, and of course, it would be a good opportunity to represent this community where I grew up and this community that I love.

“I think running for the Senate was probably the scariest leap of faith of all of these different stages [in my public career].”

He won. And now Allen is seen as a major force for higher education in the state legislature. He believes the UC is a tool the state should be proud to leverage.

“It is important to give access and opportunity, and maintain a real place for our best and brightest of all backgrounds, to come and learn from top flight faculty and expand their horizons,” Allen said. “And also to attract people from all over the world — top flight talent — to study and engage here and oftentimes live here, build a business here and build a life here.

“So much of why California has been as successful as it has been economically, socially, and culturally is because of the University of California, and the investments made in the university and the higher education system back in the 1960s and before. I think people forget that, but it ended up paying off royally over time.”

Allen said he intends to make more believers in the UC system and higher education.

“We have scaled back on that investment, and I think we have done so at our own peril,” he said “I think it threatens social mobility in our state and threatens our long-term economic growth and vitality.

“I’m someone who is a firm believer in the promise of the University of California. It’s saddening to me that there are those who don’t value that investment and see how much it has helped the state and helped bring us to where we are today.” 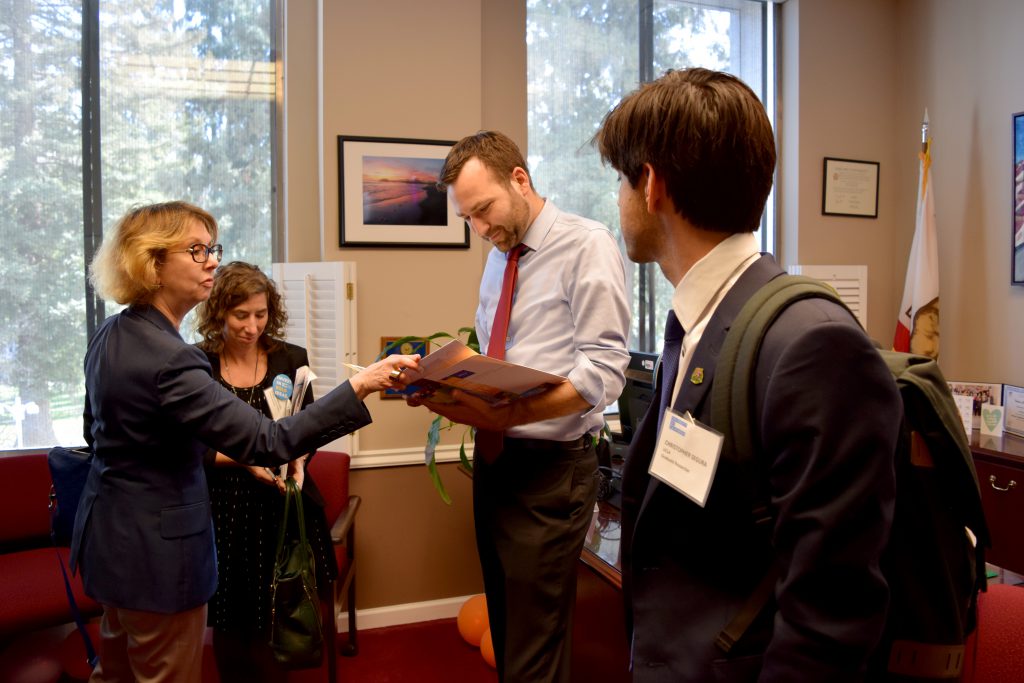 This can’t be a solo mission, though, Allen said. It will take new advocates willing to fight for higher education.

“It really is important for voters and citizens and people who engage in the political process to start raising their voices if they care about the future of the University of California,” he said. “There’s been real retrenchment over time. So we need people who support UC to step up and start engaging in the political process more. That means asking tough questions of people running for office and going up to Sacramento.”

Allen admitted that there are dozens of lobbyists advancing various causes through personal stories and face-time meetings — that’s why it is so important to have as many advocates as possible working in concert for higher education.

“The university needs to fight to be at the table for people to consider it as a worthy cause and worthy investment,” he said. “For people who are about this, engage in the process as much as you can and make sure you are talking about the university as often as you can.”