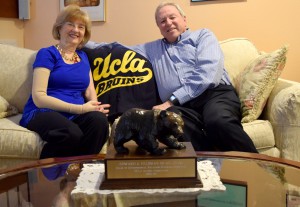 Bonnie Faherty and Edward Feldman have been UCLA advocates since the inception of the program. (photo by Jonathan Van Dyke)

Bonnie Faherty and Edward Feldman were a match made in advocacy heaven well before they embarked on a marriage of 30 years.

They have given all they can back to the people, places and institutions that have shaped them —for many years prioritizing UCLA.

So at a political dinner in East Los Angeles during the late 1970s, there was a serendipitous moment that would put two civically passionate people together, and little did they know, for the rest of their lives.

Feldman had returned to the Los Angeles District Attorney’s Office in 1976, and he was tasked with a special project: Put together the first elder abuse unit in the United States.

By that time, Faherty was known for her nursing activism — working recently as a MediCal consultant and tirelessly working as a patient advocate. She has garnered four graduate degrees (two from UCLA and two from USC).

Both were constants in the local Democratic Party scene.

“We think we’d crossed at a few events before, but didn’t know it,” Feldman said.

On that night, Faherty’s brother was visiting from Texas, and he just so happened to take a seat next to Feldman. They began to talk shop, with Feldman mentioning his task to begin combatting elder abuse. Faherty’s brother called over to his sister.

“To make a long story short, she became my nursing consultant,” Feldman said, with Faherty interjecting with a chuckle that she was an unpaid volunteer.

But Faherty knew the many key people related to the elder care industry, and she and Feldman worked feverishly together to rewrite regulations, many of which were very poorly written at the time, while lobbying the legislature.

“It took eight years, but we finally got that all done,” Feldman said.

The story that defined the beginning of their relationship also stands as the story for their belief in civic advocacy in general. It’s what they tell young and burgeoning advocates whom they regularly seek to mentor.

“You’re looking at two people here who have a history of seeing that you don’t get things overnight,” Faherty said. “There are tipping points. You can be laying the groundwork all along, and all of a sudden there’s that tipping point. And it wouldn’t have happened without all that groundwork that somebody else would say was unsuccessful.”

Faherty and Feldman won’t be deterred by negativity. And they won’t entertain a bad word on an institution like UCLA, which gave them so much.

Faherty grew up in private Catholic schools. “My father was a truck driver, and I never knew what a bachelor’s degree was,” she said. “For somebody like me who was able to go to a wonderful institution like UCLA, it was like a world I never knew existed. And it was all accessible to me as long as I worked hard.”

Feldman received his undergraduate degree in business from UCLA, but he always had his heart set on the law, where he felt he could really make a difference in the world through public policy. UCLA, to him, had a reputation as an excellent school, but more importantly, as an institution shaping young people not just to make money, but to do things that were good for society.

His parents weren’t very politically active, but they were involved in a lot of charitable work. “It was the idea that doing good is as important as doing well,” he said. “It wasn’t really spoken in those terms by them, but that was basically it, the philosophy.” 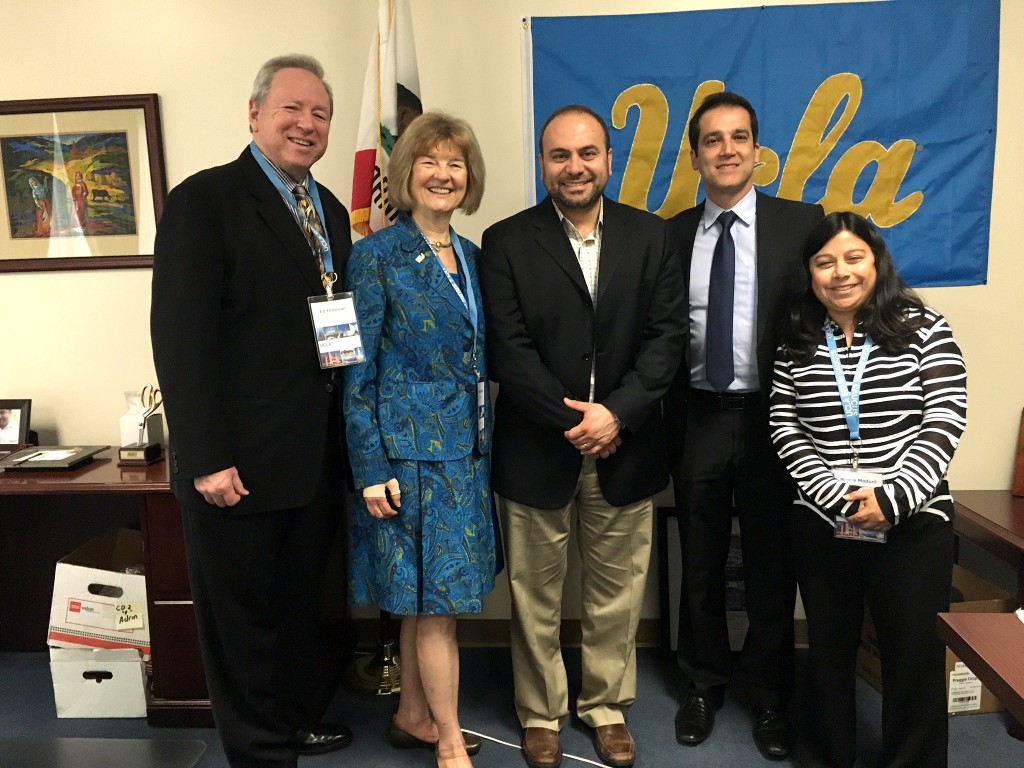 Bonnie and Ed were part of an advocacy coalition that visited with Assemblymember Adrin Nazarian during this year’s UCLA Day in the District.

Faherty’s political and civic connections landed her a good acquaintance in Mark Hooper, the man who would ultimately start UCLA Government and Community Relations — and who would ask her to join its volunteer advocates.

“Ed and I were together, so it was natural for him to be a part of it,” she said. “There were just a few of us, who knew elected people. In the case of Mark and I, we had walked precincts and done all that.”

UCLA Advocacy would become a decades long passion: Writing letters, making phone calls, correcting public misconceptions, encouraging students to attend UCLA and talking to legislators in any and all capacities.

“More than anything else, this is about us wanting to give back,” Feldman said. “We know in both of our cases how integral UCLA was to making us the people we are today.”

And so they have worked over the years, laying groundwork and waging battles, and making sure young people know they can make a difference, too. Recently they have sponsored students — especially nursing — to go on trips to Sacramento and Washington DC as advocates.

“Legislators have an open ear to the staff anytime,” Feldman said. “They have a larger ear open to constituents, and if those constituents are young students, they eat it up.”

Important issues over the years have included pushing for STEM support, preserving and expanding Pell Grants and simply asking legislators to take a leadership role on higher education issues.

“Sometimes maintaining a budget where it is, is a victory and a success,” Faherty added.

It is important to be undeterred by the occasionally glacial pace of advocating and progress by the government, the couple said.

“However broken it is, it is still the only game in town,” Feldman said. “But of course you take your lumps. And every once in a while, you break through.”