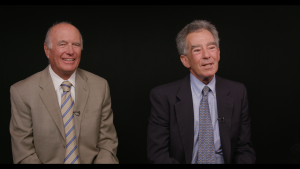 Former State Senate Republican Leader Dick Ackerman and former Democratic Congressmember and State Assemblymember Mel Levine may come from different sides of the political aisle, but their love of higher education has united them in a common cause as co-chairs of the California Coalition for Public Higher Education.

Both men came to politics in completely different ways.

“I’m, in many ways, a child of the 1960s — deeply concerned about civil liberties and civil rights,” said Levine, noting his opposition to the Vietnam War as a younger man and his desire to protect the coast and bolster higher education as sparks to the beginning of his political career.

Ackerman, on the other hand, said there was no magical turning point for him when it came to politics. Instead, his community and business ties slowly got him integrated into the Orange County political scene — first when colleagues suggest he work on a campaign or two, then forming a Political Action Committee (PAC). He joked that once the PAC had gotten too many people elected, he was up next and forced to run for city office.

“I sort of enjoyed it,” he said with a chuckle. “And then I was looking at the state, and decided rather than try and influence people in the state legislature, I’d like to be the one who voted. It all just sort of happened, but I’m glad I did it.”

At the backend of their time as legislators, and especially after their political retirements, both noticed that higher education funding began to fall by the wayside on the state level.

“A number of us got concerned about that and decided to form an organization to see if we could improve that situation,” Ackerman said. Added Levine, “After leaving political office and going back to the practice of law, I was alarmed at the extent to which the legislature abandoned its past support of higher education, and particularly the University of California.”

“Particularly for low income Californians, having a college education is a path to social mobility on the merits. It’s the most American of traditions. For people to achieve the American dream, they ought to have the opportunity to do so,” Levine said.

But to two former and high-ranking legislators, how does a higher education advocate move the needle and make a dent in the conversation? To those who are unsure whether they can make impact, especially without money, these two former legislators have news for them.

“Individuals can have a surprising degree of influence on legislators,” Levine said. “And UCLA is in a unique position to provide a broad and diverse array of individuals who can have an impact. If legislators hear from people they know are connected to their district, or to them in some way, the closer the connection the better. It’s easy to do, and picking up the phone, or writing a letter, or being willing to donate to a supportive legislator’s campaign matters to legislators and they pay attention to those things.”

“The best contact from a legislative standpoint is having your friend call you about an issue coming up. So you can make a difference,” Ackerman said.

Levine even said that random constituents used to call his office with legislative ideas, and if they were good, he’d run with them. The key is tone, candor and effort.

“If you don’t have the resources to write a check, you can still influence a legislator.  You can reach out to your Assemblyman or state Senator and let them know the reasons why increasing financial support to UC is important to the state and your community.  You can develop a relationship with your legislator and touch base with him or her from time to time and become someone he or she listens to on this issue.  Many people believe that the only way to influence a legislator is to write a check.  But you can have an impact by developing a relationship and focusing on an issue, totally unrelated to writing a check.

He specifically recalled a time a limo driver called his office out of the blue and suggested some regulations in transportation. “That became a law. That was from someone I had no relationship with. Didn’t give me a dime. I turned it into legislation.”

Ackerman added that it is key, when building relationships with legislators, to really drive home and identify the one or two issues that are most important to you. “You are in the number one population density, you have the media market, so there is a lot of things UCLA can do. I would continue to press the positives. I’d be more aggressive in pushing the good things the campus does.”

So yes, these are two UC Berkeley alums talking to the UCLA Advocacy team, but they know the selling points here. “To maximize our effectiveness, we need as much participation as possible for activists who care about UCLA and other UC campuses,” Levine said.

“It’s a question of getting people to make public higher education a much higher priority, and to be willing to fight for it,” Levine added.