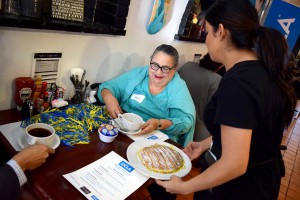 The new 8-Clap Stack was served during a special Pancakes and Politics event with Mrs. Carol Block and Councilman Felipe Fuentes. (photo by Jonathan Van Dyke)

A group of UCLA alumni gathered Feb. 25 at Myke’s Cafe in Pacoima to enjoy good conversation and the company of Mrs. Carol Block and Seventh District Councilman Felipe Fuentes for a special Politics and Pancakes event.

The restaurant, with the help of Mrs. Block, introduced the 8-Clap Stack. The new menu item consists of two massive blueberry buttermilk pancakes with lemon curd to emphasize UCLA’s blue and gold colors.

Fuentes also engaged the audience about various local issues that his council district and the city are dealing with now and into the future. 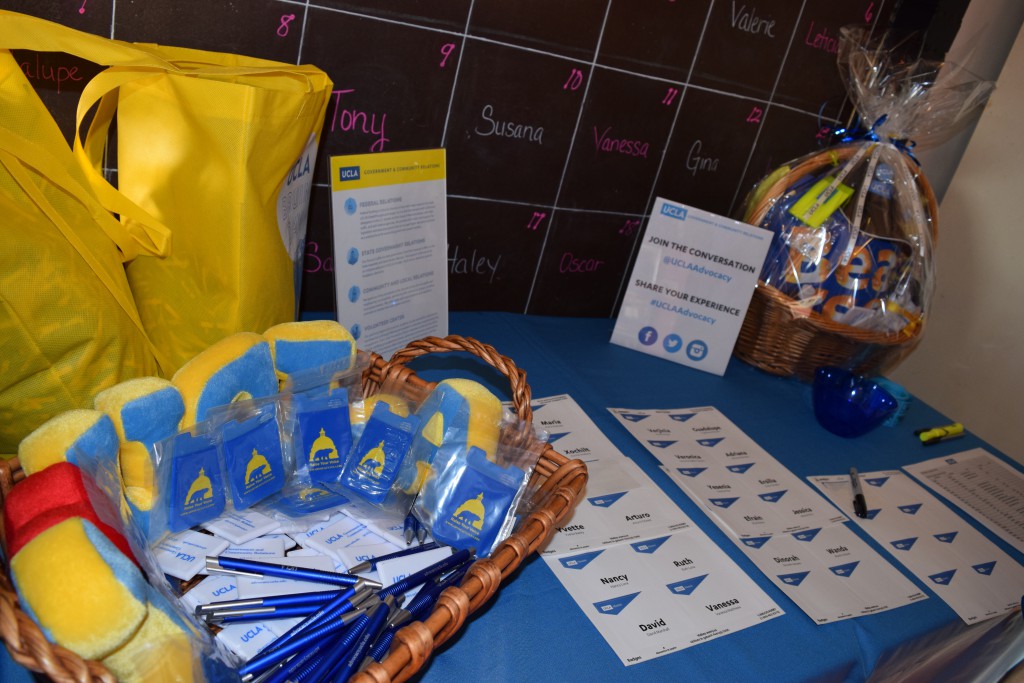 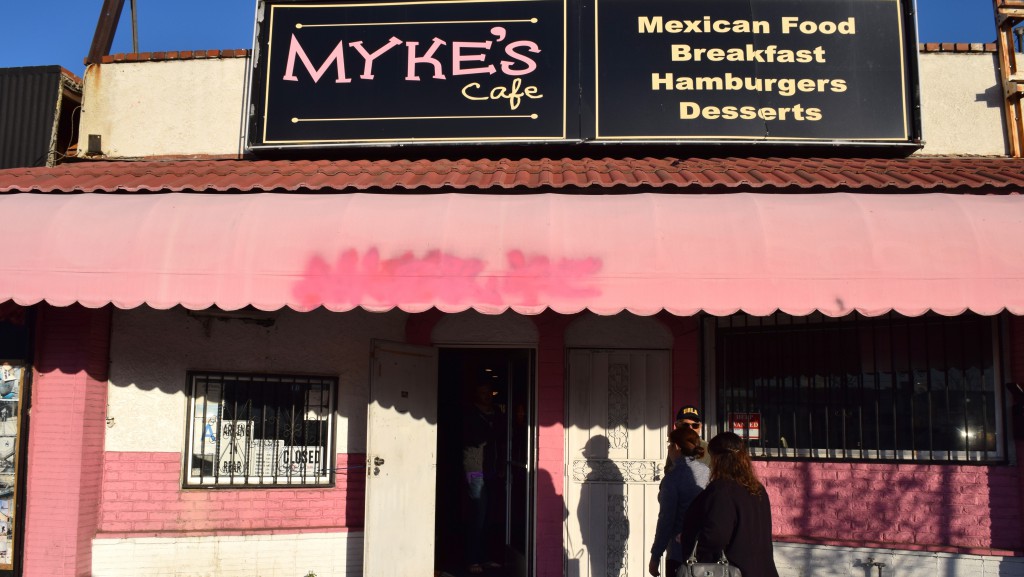 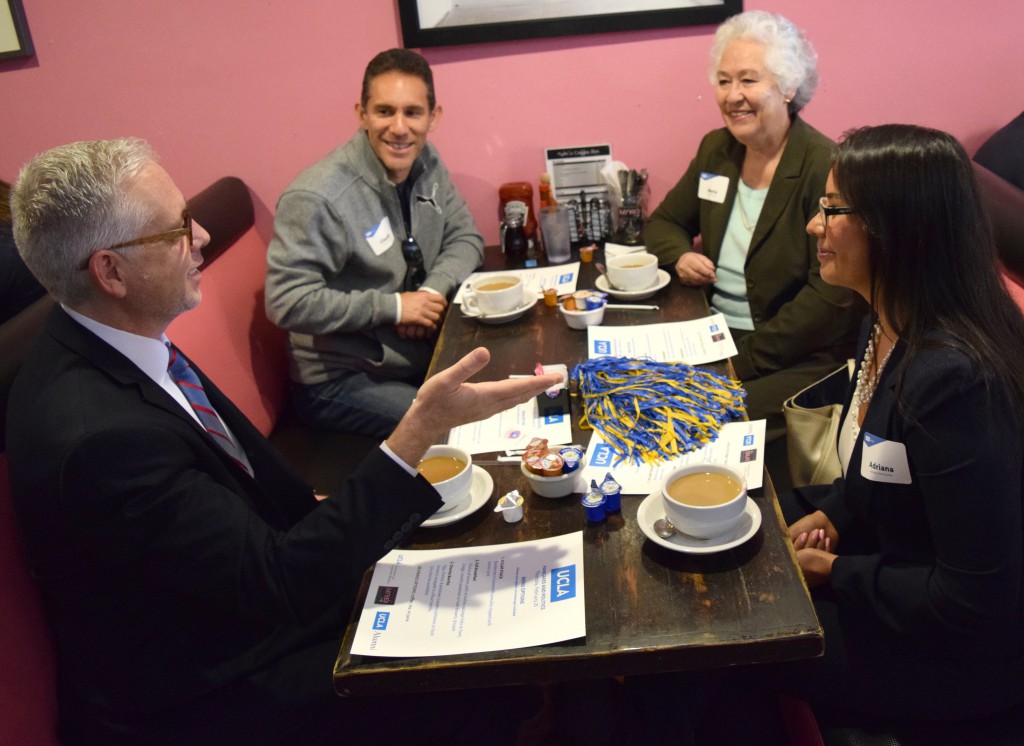 Alumni gathered and mingled while drinking their morning coffees. 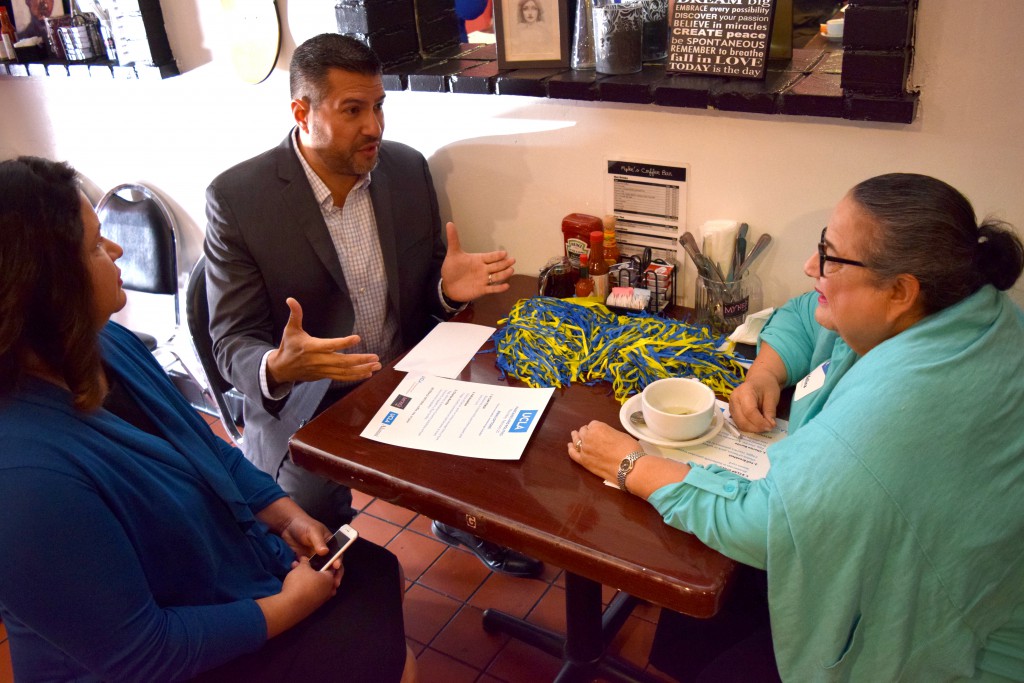 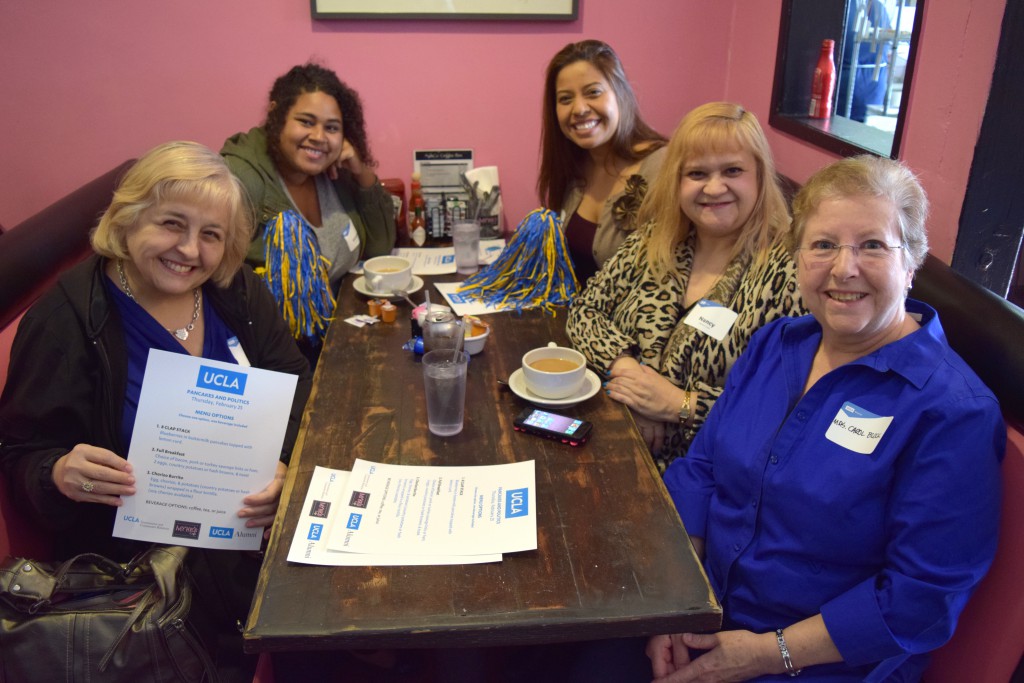 Mrs. Carol Block had fun talking with alumni before introducing the 8-Clap Stack new pancake menu item. Last year, she and other alumni had discovered that there was a USC-themed item, but nothing for her fellow Bruins — something they worked to remedy. 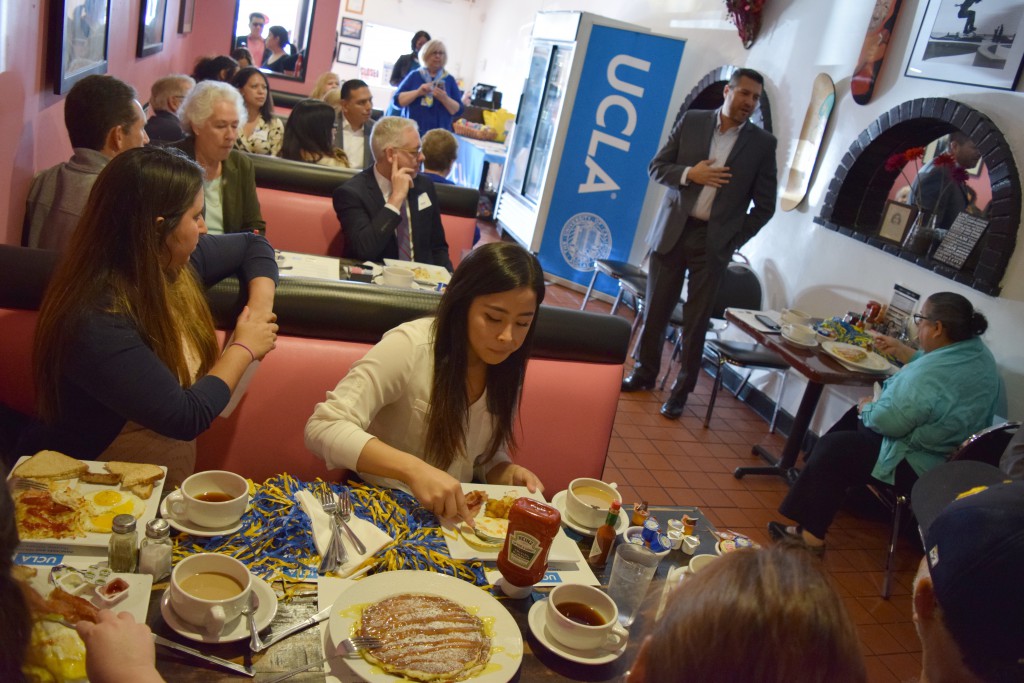 Fuentes talked to the crowd about increasing the business footprint and foot traffic along Van Nuys Boulevard. He said he believes there is a renaissance taking place in Pacoima. City officials are examining how to slow down streets like Van Nuys Boulevard for the purpose of allowing people to more easily enjoy the businesses and mural art there, creating a greater sense of community. 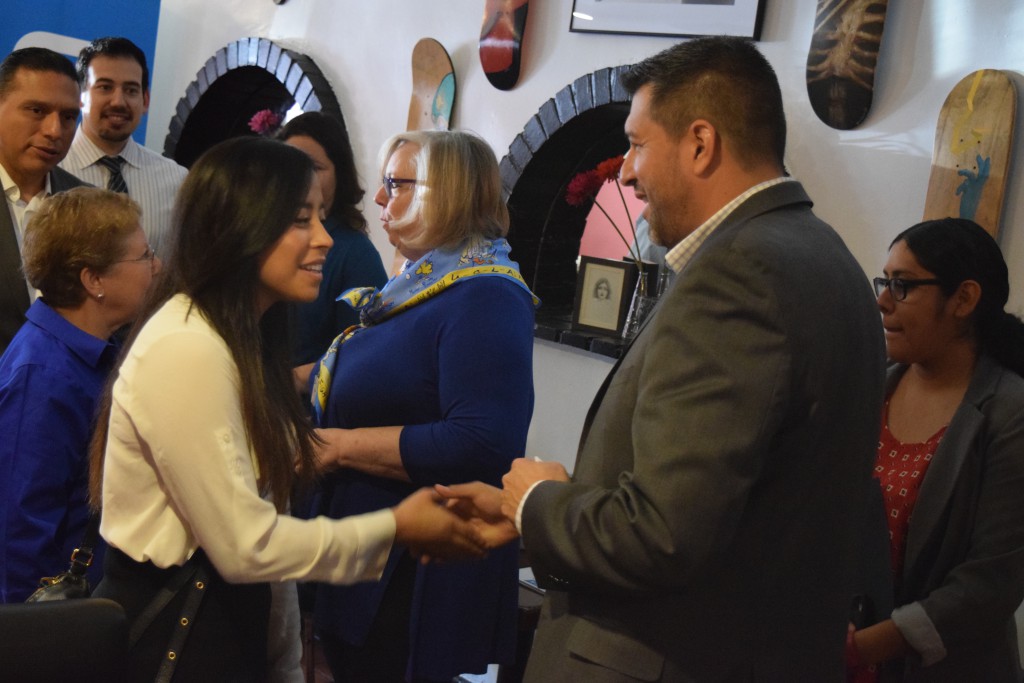 “I’m very excited about the future of Los Angeles, especially with so many Bruins,” Fuentes added. 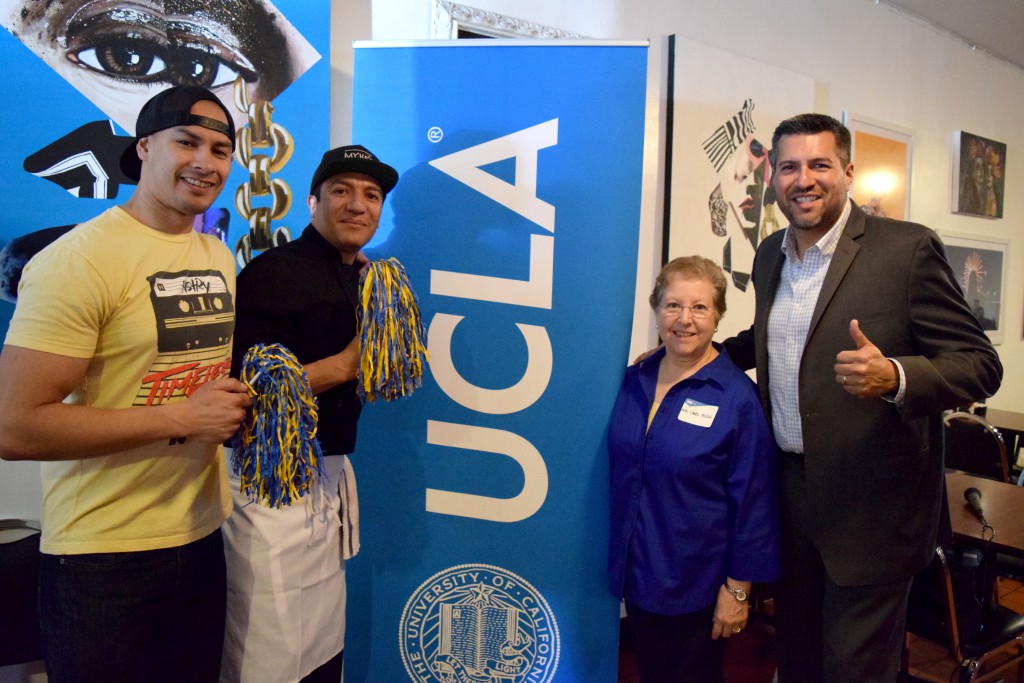 Myke’s Cafe co-owners, and cousins, Rafael and David Andrade said they were hopeful for good momentum along Van Nuys Boulevard. They started the business four years ago, which has become known as a great breakfast and lunch restaurant — particularly for the pancakes. “It’s exploded and now people are coming from every direction,” Rafael said. 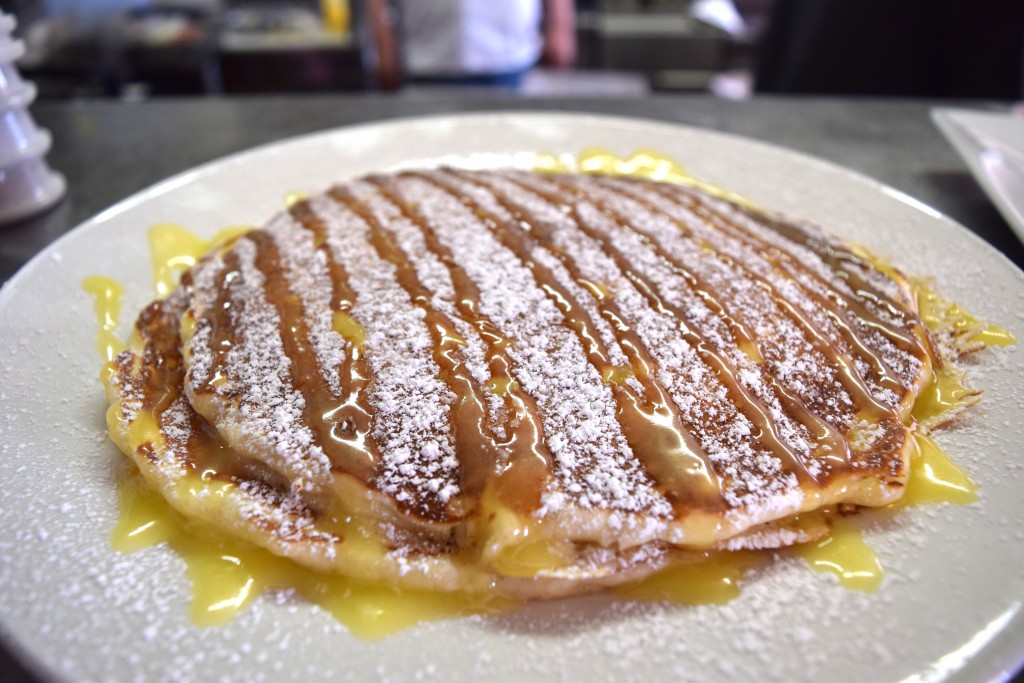 The 8-Clap Stack, which is made up of two giant blueberry buttermilk pancakes lined with lemon curd, will continue to be available to Myke’s Cafe customers for now and into the future. For more pictures, visit Facebook or the Flickr photo album.